UnitedHealthcare's Don Langer Elected to Board of Directors

UnitedHealthcare's Don Langer Elected to Board of Directors

The UHC Texas Health Plan CEO will serve a two-year term in an at-large position. 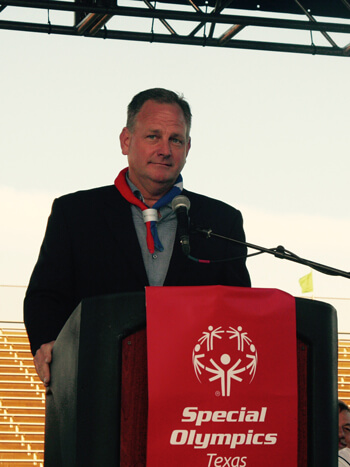 AUSTIN – Don Langer (Houston), the CEO for the UnitedHealthcare Community Plan of Texas, has been elected to Special Olympics Texas’ (SOTX) board of directors, the non-profit organization announced Wednesday. He will serve a two-year term in an at-large position on the board.

“The board of directors is very excited to have Don Langer join us in 2017,” said Chad Tywater, SOTX board chairman. “We are looking forward to utilizing his expertise in the health and wellness industry within our Healthy Athletes program.  The SOTX Healthy Athletes program in the largest global public health organization dedicated to serving people with intellectual and developmental disabilities.”

“Special Olympics Texas is a great partner and an organization with whom UnitedHealthcare shares a similar mission,” said Langer. “We’re both committed to helping Texans live healthier lives, and we’re passionate about serving our communities. I look forward to serving on the Special Olympics Texas board of directors and work to create an even better Texas.”

Since October 2015, UnitedHealthcare Community Plan of Texas has been an official year-round partner of SOTX. During that span, UHC has donated $500,000 in cash and in-kind services, including funding for the R.A.F.T. Communications Research Project. UnitedHealthcare employees have contributed to SOTX’s annual Scarf Project and they have provided volunteer support at all three major annual statewide competitions. In 2017, they intend on providing volunteer support at the local level Area Competitions.

Langer joined UnitedHealth Group in 1995 and has served in his current role with UnitedHealthcare since 2012. He works closely with the State of Texas Health and Human Services Commission to support the membership jointly served by HHSC and UnitedHealthcare. In addition to the Medicaid programs administered by HHSC, Langer has accountability for the Texas membership that is dually served by both HHSC as well as the Federal Medicare program.

Prior to his current position, Langer served as Chief Operating Officer of AmeriChoice for the New York plan and CEO for the Connecticut and Delaware plans. Before that, he was responsible for overseeing the integration of UnitedHealth Group’s acquisitions, various operations, networking and strategic innovations.

In addition to Langer’s professional experience, he has been an advocate for children and has demonstrated commitment to serving young people. Before his time in Texas, he served on the Board of the Hartford Boys and Girls Club, was an active member of the YMCA and coached youth sports for over eight years. Langer was also the Chairman of the Board of Directors for the Governor’s Prevention Partnership Program, an organization that develops programs to address and prevent youth bullying, violence and drug abuse in Connecticut.

More recently, Langer has supported the Texas Alzheimer’s Association. He became a member of the Board of Directors in December of 2014 and has promoted fund raising for Alzheimer’s research through the Walk to Cure Alzheimer’s as well as other statewide projects.

2017 SOTX Board of Directors