DALLAS – A pair of Texas public safety officials have been recognized for the community service they perform outside of their everyday jobs. The Law Enforcement Torch Run (LETR) for Special Olympics Texas (SOTX) has announced the members of its 2016 Hall of Fame class. Ector County ISD Police Officer Freddy Nayloa and former Addison Police Sergeant Brad Freis have been tabbed with the honor and were formally enshrined on May 26 during a ceremony held at UT-Arlington in conjunction with SOTX’s 47th annual Summer Games. 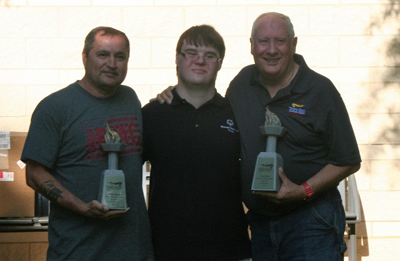 Nayola earns his call to the hall for serving as a LETR member for more than 20 years. During that stretch, he has been a Key Volunteer for SOTX in the Permian Basin/Big Bend Area (Odessa and Midland) and has been part of a unit that has raised a significant amount of money for LETR.

Every year, Nayola helps raise awareness and funds to support SOTX athletes in Midland and Odessa through the Ragin’ Cajun Golf Tournament and the Polar Plunge.

“Officer Nayola has been an instrumental member of the Area 18 [Permian Basin/Big Bend Area] Torch Run group,” said Deputy U.S. Marshal Brent Sheets. “He insures athletic events run smooth and the athletes feel welcome and have fun at events. Officer Nayola is always one of the first officers to step up and fill in when things need to be done.

Freis has been involved with LETR for more than 20 years, serving in numerous capacities over those years. Now and while he was with the Addison Police Department, he often took on lead roles in most fundraising efforts for SOTX, including with the International Law Enforcement Torch Run.

In 2015, Freis served on the Torch Team for the Unified Relay Across America, which was a 46-day humanitarian event that featured more than 20,000 people passing a lit torch – the Special Olympics Flame of Hope – across the country to help deliver it to Los Angeles for the Special Olympics World Games.

“I have seen him at so many fundraisers, it’s hard to remember which one,” said Julia Scott, a longtime SOTX volunteer from the Carrollton area. “Brad can always be counted on to be involved with the Torch Run.  Other police officers from the Metrocrest cities have been involved over the years, but few have displayed the kind of dedication and consistency that Brad has.”