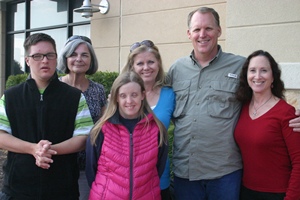 Ready, set, gold! Team Texas is officially in training for the Special Olympics World Winter Games in PyeongChang, South Korea.  Austin area athletes, Cory Gentry and Alex Miller, will compete in figure skating at the Games, January 26 - February 6, 2013.  They were the only Special Olympics Texas athletes selected for Team USA.

Thirty year old Gentry is a member of the Hill Country Stars team.  She started competing with SOTX in 2006 and also participates in basketball, soccer, softball and bowling, just to name a few sports. Twenty-two year old Miller joined SOTX in 1997 and competes with the Hill Country Stars and Chaparral Ice Diamond Spurs as an aquatics, powerlifting and tennis competitor.

“Skating is a skill that takes a while to master,” said Don Gentry, Cory’s dad. “It’s very exciting.  It’s a long ways away, but it’s kept us focused and kept her focused.”

In preparation, The Gentry Family is slowly learning the Korean language.  They learn a Korean word each day via a mobile app.  They’ve already mastered a couple words so far.

“Yes and no,” laughs Gentry, who’s worked in South Korea several times over the years on Army exercises.

The Millers are also preparing by familiarizing themselves with the layout of the land.

“We’ve started doing a little bit of geography – letting him know where he’ll be going and how he’ll get there,” said Alex’s mom, Marcia Miller.  “I’ve put up maps in his room.”

There’s also a need for emotional readiness.  Athletes who compete at World Games must be independent enough to spend several weeks away from home.  At the Games, they’ll spend most of their time with their teammates, and hardly any time with their families.

“It’ll be harder for my husband and myself [than for Alex],” Marcia admitted.  “He’s traveled a lot just like Cory, so, they’re familiar with travel and going through airports.”

The impressive pair practices twice a week at Chaparral Ice – Northcross in Austin.  Chaparral Ice’s director, Kathy Goeke, lets them use the rink for free.

“Our director is very accommodating for what we may need,” explained Peggy Grant, Chaparral Ice Diamond Spurs Assistant Coach.

In fact, Chaparral Ice lets the entire Chaparral Ice Diamond Spurs team practice at the rink year-round at absolutely no cost.  It’s just one example of the support and encouragement that Gentry and Miller have experienced since being selected for Team Texas, especially since they were only recently chosen to join Team USA.

Both families must raise $2,300 to offset the two-day 7,000-mile trek to World Games.  Already, the Gentrys have met 25% of their goal by simply posting a donation request on their Facebook page alone. It took less than a week for the Millers to raise nearly a third of their goal.

“We’re just getting started preparing for the financial part.  It’s been really rewarding,” said Alex’s mom, Marcia.  “To have people outside your comfort zone [show so much support], you wonder, ‘how do they even know already?’ It’s really incredible.”

The progress that Team Texas has made, both athletically and socially, is also incredible.  Head Coach Marsha Brenneman became a SOTX coach nine years ago and is extremely proud of how far the athletes have come.  She appreciates their hard work and commitment because she knows how challenging the sport is.

“I took lessons growing up in Houston in my teen years,” she recalled.  “When I heard about the opportunity to coach Special Olympics figure skating, I just knew it was the right organization for me to get involved with and the right way for me to share a God-given talent.  To be a part of SOTX is a blessing in general. Special Olympics really provides a forum for excellent athletic opportunity. ”