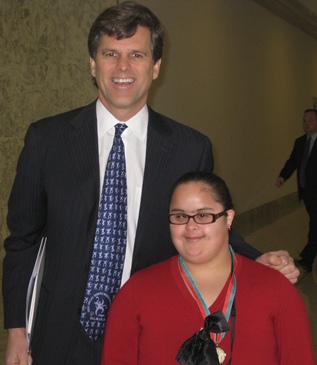 Celina Escobedo made a lasting impression on legislators, lawmakers and leaders during Capitol Hill Day in Washington, D.C. on February 8. The certified aquatics and bowling coach and Global Messenger was among 27 SOTX representatives who visited the Capitol to ask for continued support for the movement.

“Celina did very well,” exclaimed her mom, Rosa Escobedo.  “She was a real lobbyist!  We toured the city the first day and had meetings and rallies for Special Olympics and Best Buddies.”

Celina had four appointments with four different legislators on Hill Day.  She met with Congressmen Pete Sessions, Ruben Hinojosa, Blake Fahrenthold and Silvestre Reyes.  She talked about herself and how Special Olympics Texas has helped her both physically and socially.  Celina also asked the lawmakers to consider co-sponsoring The Eunice Kennedy Shriver Act and continue funding SOTX.  Three of them committed to the movement, but Celina’s impact on all of them was clear.

Celina was unwavering in her efforts and even offered the fourth congressman a chance to see what he could learn by getting involved. She confidently assured him, "If you don't know how to swim, I can teach you," which made him smile.  In fact, he was the first one to send Celina and her mom a picture and an e-mail congratulating Celina on her success.

During the trip, Celina excitedly gave out SOTX pins encouraging support of Special Olympics.  She didn’t hesitate to hand them to anyone she encountered at the Capitol, including custodians, secretaries and interns.  In fact, no one within her reach went unpinned.

“Before I knew it, she had stopped a gentleman and started talking to him,” Rosa said.  “To our surprise, he was [Special Olympics CEO] Tim Shriver.  He was so touched by her that he asked her to sit next to him in the meeting with Congressman Sessions.”

Celina’s positive influence on those around her continued after Hill Day ended.  Her warmth, confidence and winning smile had the crew on her return flight to Texas beaming with pride and respect.

“She went up to the captain and gave him a pin and asked if he would take a picture with her,” Rosa explained.  “I quickly went for my camera and snapped a shot of them.  He then took her into the cockpit and let her sit in his chair while the co-pilot showed her all the instruments!  I am so happy she has had this opportunity to teach the world.  She plans on going back next year.”

…And the Capitol would be lucky to have her.