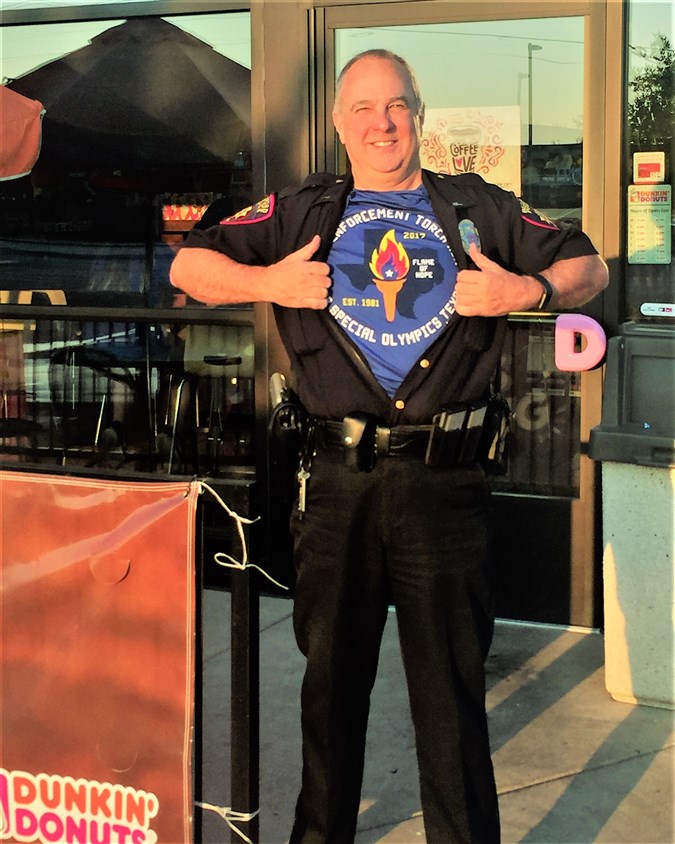 Kirk has served his country in the US Army, as well as the Bedford Police Department in law enforcement for a total of 38 years! Kirk was born in Nebraska and has traveled to South Korea, England, Minnesota, Florida, Colorado, and many other places throughout his police career. He was initially introduced to the concepts of community vicariously through his father who was in the Air Force. Kirk established a sense of belonging through his involvement in churches and Boy Scout groups throughout his childhood.

Kirk had the opportunity to interact with law enforcement one year, between his freshman and sophomore years in high school, working in an internship with the Military Police on RAF Upper Hayford in England. He joined the Army in 1983, where he also attended training to be a military working dog handler (K9 Handler). During his time in the US Army, Kirk was stationed in Colorado and South Korea. As his reenlistment time came up, Kirk decided to end his time in the military and try a career in law enforcement. That actually turned out to be his path!

Years later, after both of his parents had passed, Kirk found a letter he’d written when he was 14-15 yrs old, that talked about his projected career goals. In the letter Kirk had written, “I want to join the Army as a military police officer and then become a civilian police officer.” He found the letter when he was in his 50s.

After making the decision to not reenlist in the military, “I came across a book that listed most of the law enforcement agencies in the USA. I applied at 60 different agencies, 30 in Texas and 30 in Colorado, by hand, and received feedback from 15 or 20 of the agencies. I arrived home in Fort Worth on a Friday after my enlistment was over, and saw a letter from Bedford PD stating that their written test was on the following Monday. Three weeks later I was working for the Bedford Police Department. It has been 35 years now,” he said proudly.

Kirk touts a strong resume with experiences in the Army, Bedford PD, and on special units like The North East Tarrant County Child Abduction Response Team, a program through the US Department of Justice. In the military, he gained experience in law enforcement, combat operations and as a military liaison with Colorado and South Korean governmental agencies.  With the Bedford Police Department he worked in patrol, criminal investigations, recruiting, training, and community services. After he retired in 2018, Kirk chose to remain with the Bedford PD in a reserve officer status, saying  “I chose to continue into retirement because I wanted to be able to work with Special Olympics,” he said.

“Overall working with SOTX, LETR, and law enforcement has taught me to listen. It goes back to my military police days. They’ve helped me to be more understanding and empathetic. Everyone has different experiences in their lives that are unique. Sometimes all people need is for you to listen. You have to understand the whole picture and not just the “facts” of a situation. There are individuals’ lives involved and not just that particular moment,” he emphasized.

Kirk first got involved in an informal way, after former Bedford officer, Russell Tucker, introduced us to the Versocki family, including Christina Versocki. Over several years Bedford PD hosted several small fundraisers and donated a portion of the proceeds to SOTX. “Back then I was only involved in the background, with most of the events. But, about 10 years ago I became more involved as the department’s Special Olympics Coordinator,” he said.

Kirk explained that “ We have been involved in Polar Plunges, Tip a Cops at Texas Roadhouse, Torch Runs, and many other events, including the SOTX Summer Games in the past. Texas Roadhouse has always been welcoming and open to partnering up with us for events. Prior to the pandemic, I spoke with our Texas Roadhouse connect and we discussed doing an event every month or extending the statewide event to be a week long one. We thought about incorporating local colleges and different theme nights.”

“It’s very rewarding to go to events and meet other law enforcement, the athletes and families. I’ve always experienced the joy the athletes have and their love of it. The smiles that they give out are infectious. I am appreciative of their commitment. The athletes really need and deserve the resources we raise money to purchase.”

Kirk’s voice lit up as he spoke about the Arlington Summer Games. He said, “One of my favorite moments was in 2017 or 2018. I was asked to run alongside a SOTX athlete in the opening ceremony for the Summer Games. The only way I can describe it is infectious. The athletes and teams walk in just like the Olympics. I remember Dallas PD had the Dallas Dancers, a group of officers who danced and sang songs at the event. I got worn out after about four dances but the athletes were still going. With Chief Williams as Bedford’s new chief, I know Special Olympics will be a priority and I am excited about it!”

Kirk left some encouraging words to the SOTX athletes. “Last year was just difficult for everyone. Look for the good and keep on smiling. Life is like a competition, it’s just a very long competition that repeats itself every day, every month, and every year. Sometimes we struggle, sometimes we win big.” He ended with a quote from the great Jesse Owens:

Find the good. It's all around you. Find it, showcase it and you'll start believing in it.

Special thank you, to Kirk Roberts and the Bedford Police Department for your continued support!