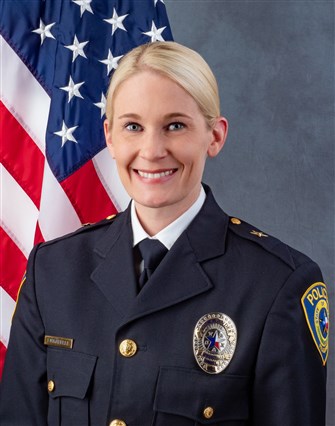 How did you decide to join law enforcement?

“When I was a little kid I always wanted to be a marine biologist but that turned out to be a no go,” Mirabelle laughed. Then her tone turned somber as she recollected the biggest influence on her decision to join the force. “Austin experienced a very horrific crime that became known as the Yogurt Shop Murders,” Mirabelle stated. Four teenagers were murdered and one of them was 13, Mirabelle’s age at the time. Mirabelle followed that case, “ it reeled me in and completely drove me into true crime novels and psychology,” she said.

“I started as a State investigator working in crimes against children. My ultimate goal was to become a Child Abuse Detective, which I did ... Currently, (as a Commander) I am over our Patrol Bureau, Recruiting, Hiring, Training, and Internal Affairs,” Mirabelle explained. Commander Mirabelle attended Texas Christian University and Texas State University where she earned her bachelor’s degree in Criminal Justice. Mirabelle interned with the Austin police department in their Sex Crimes Division. She interned for a year and a half while working the night shift at a local hospital emergency room. She is currently enrolled at Sam Houston State University working on her Master’s degree. Tricia is married with two kids, a freshman, and a 7-year-old.

Did you have positive interactions with law enforcement when you were growing up?

“I did not have family members in law enforcement and my family could not understand why I wanted to be a police officer,” she said. Even though Commander Mirabelle did not have familial ties to law enforcement she recalled the memory of a late officer, Todd Meyers. “He was the officer who you didn’t run from, but you ran to. He always had a smile on his face. I always remember Todd as being the person and officer I wanted to be like. He respected us and left a positive mark on me for sure. I would hope every officer would be that example for juveniles,” Mirabelle said. Commander Mirabelle did not have many ties to law enforcement, this influenced her decision to become part of the Blue Guardians later in life.

“Pflugerville started the Blue Guardians Program in 2017. Chief Robledo brought it with her from the Austin Police Department. We are now a 501c3 that reaches out to at-risk, impoverished, and sex-trafficked youth,” the Commander stated. She was noticeably passionate and spoke proudly about the many events Blue Guardians do. “We have included SOTX athletes in our circle and love to support them in all that they do. We invite SOTX athletes to events like Blue Santa, where they help pass out gifts. We have a basketball game every year and show up for their events. We do as much as we can for them, but they really do more for us,” Mirabelle said in a humble tone.

What sticks out as a highlight from your work with Blue Guardians?

Their “inner joy, when you talk about athletics they are the epitome of teamwork and leadership. They’re sarcastic and smart alecks, and it turns our day around. They know us on a personal level. They’re always happy,” Mirabelle remarked.

Mirabelle works in collaboration with the Falcons at Hendrickson High School. “Amy is our liaison and that’s how we get involved in our Tip A Cops with Texas Roadhouse. We have so much fun! Our officers show up in uniform and we try to get as many people as possible (to come). We get to interact with our community and our athletes and the athletes get to be on the news,” Mirabelle explained. Commander Mirabelle and the Pflugerville Police Department have been participating in Tip A Cops for the past 3 years and were scheduled to participate in the Opening Ceremony at the Summer Games.

“The pairing between Special Olympics athletes and officers is special because we see so much negativity on a day to day basis, but when we hang out with our athletes, they make us smile, they see all of the good in the world, and they turn our day around. The athletes are always happy and positive and they bring that with them everywhere. We love being around them,” Mirabelle said cheerfully.

What has been your favorite LETR experience?

Mirabelle said, “Oh gosh there’s a lot! Tip A Cops are always fun, food, and a good time for us to represent and be there for our athletes. We have a “Rumble In The Ville” football game every year when we play alongside our athletes.  Most of us come to work the next day with a limp and some bruises.”

She went on to explain that she played year-round sports growing up. She talked about the happiness she feels when competing in basketball, football, and track with Special Olympic athletes. “Shout out to the Falcons, take care of yourselves, and each other. We are ready to put on our basketball shoes and play! It is never a task or a chore to hang out with our athletes, they do so much for us,” said Mirabelle.

Do you have a piece of advice and/or encouragement for athletes?

“Our biggest message is that we love them and we can’t wait to cheer them on. We want them to come back ready to play and do great things,” she said supportively.


Special thanks to Commander Mirabelle and the Pflugerville Police Department for your continuous support of the Special Olympics!