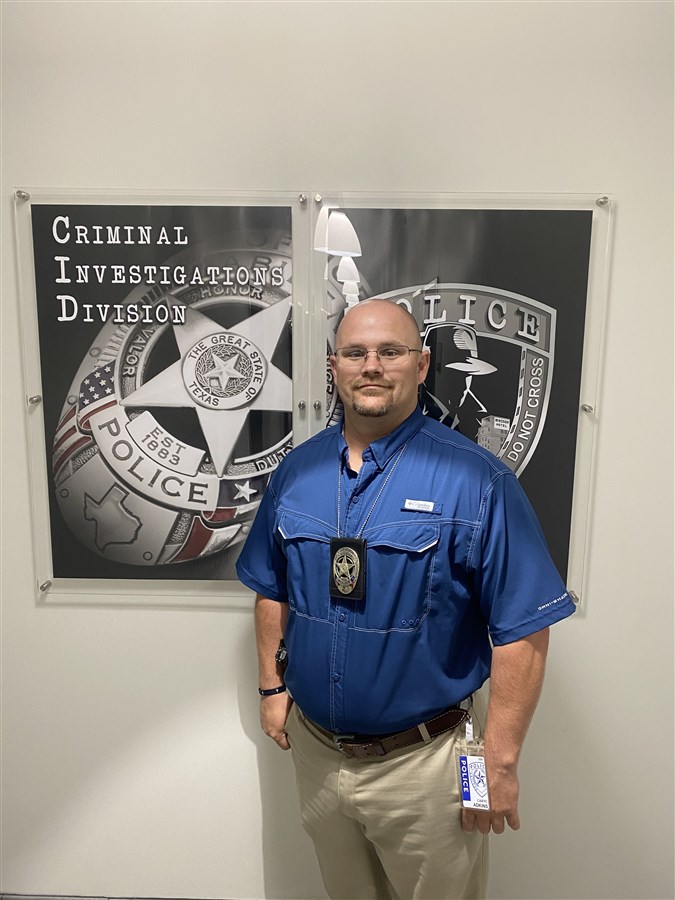 “I think of all of the athletes I’ve had interactions with … Thank you for being an example of how others can live their life to the fullest.”


Prior to law enforcement, Adkins worked at a local rehab facility administering drug tests. One day, he administered tests to a family of four and they all tested positive for drugs. Since Adkins grew up around addiction, the family’s positive results “struck a chord. Being an officer helps parents, and prevents kids from a life of addiction,” Adkins said. After realizing his calling in law enforcement, Adkins spent eight years in patrol, three years as a detective, and now investigates fraudulent activity like identity theft. “When I decided to become an officer, my wife was timid but extremely supportive. We’ve talked about this at every step in the road,” Adkins said.

“We’ve lost a lot of friendships because of what I do. Family members minimally associate with me because of their experiences with addictions. Initially, we thought it was new to them, so we gave them time to adjust. Some of those friendships eventually withered away; you can’t force it on people. Our Special Olympians have probably dealt with that their entire lives because of their extra abilities,” Adkins said in a somber tone.

The conversation shifted focus to incorporate community relations. Adkins said, “With the questions on police brutality ... they shouldn’t be perceived as ‘us versus them.’ We are civil servants. We are held to a higher standard.

“I’m very loud and animated by nature. I also rest my hands in my belt loops, near my gun subconsciously; the combination makes people uncomfortable. I’ve learned to not be so loud and to place hands differently. These changes make me more approachable and make the people that I speak with more receptive to my questions,” Adkins stated. Adkins has also learned “triggers,” actions that make people upset.

Adkins went on to say, “I give credit to Abilene citizens for being responsible in their protests, and I think concerns need to be heard about the things going on in other areas. Our department has started the Threshold Program through Facebook to ensure safety, and ensure that everyone’s concerns are heard. At one of the meetings, an Abilene resident said she did not feel comfortable having another child because of the current climate … This is why these meetings are important. If we do not know what’s going on we can not help,” Adkins said.

“My wife works at Texas Roadhouse, and I reluctantly agreed to go to a Tip A Cop with her. As soon as we went it was like, wow, this is awesome! I’ve been involved with Texa Roadhouse since 1998 when that location opened. We are competitive with San Angelo, so every year we compete with them to raise more money. I’ve really stepped in to call out my co-workers to get them involved.  I met Luann through Special Olympics, she is such a great woman and her passion rubs off on you,” Adkins says.

“My favorite LETR memory is of Chief Stanridge and SOTX athlete, Taegan, at one of the Tip A Cops. Chief committed to his time slot but ended up staying all night long. I remember that Chief was in uniform and Taegan was dressed in cowboy boots and jeans. Chief was leading the charge. It was very motivating to see my leader show up in that way” Adkins stated.

In closing Adkins smiled and said, “Special Olympics has become so personal. My son participates, and it’s starting to become a generational thing. I get so much encouragement, it motivates me to do more.”