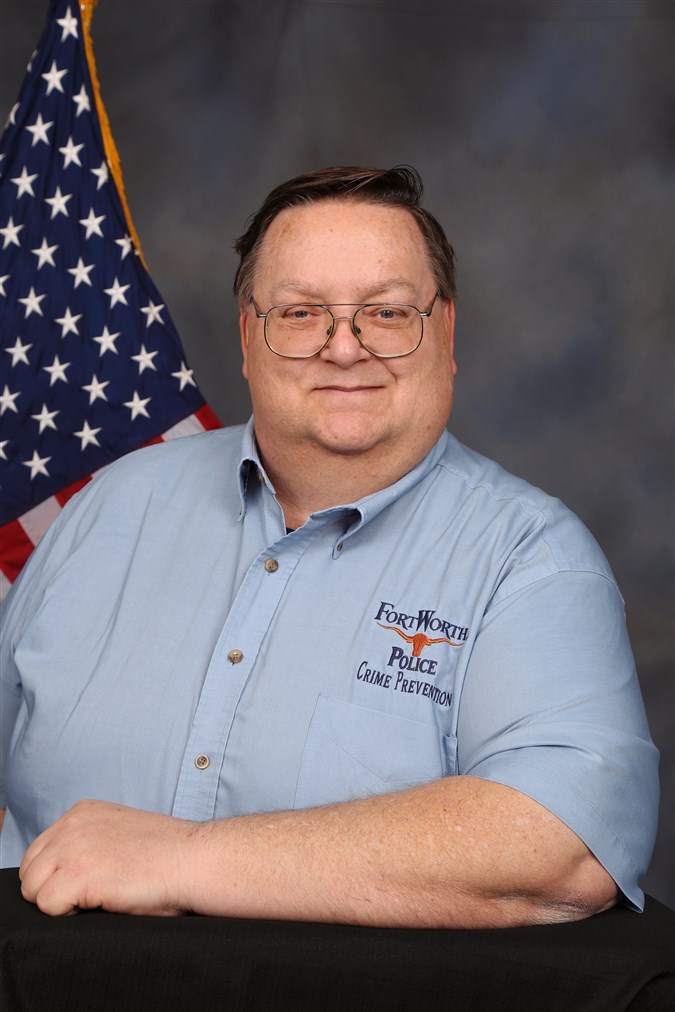 Unlike our other interviews, Billy serves in law enforcement as a civilian. He started out in Crime Prevention 23 years ago and has enjoyed his time there ever since. He was exposed to civilian work through the Citizens on Patrol Program, an experimental neighborhood watch program implemented in the 1990s. “We were the eyes and ears for the police department. We had radios and we’d call in if we saw something. It made a real difference in our neighborhood,” Billy noted.

“Eventually the city redrew jurisdiction lines and decided to build a police station in our neighborhood. I was able to give input on the finishing touches. Having the police station there made the community and the police more of a partnership,” he recalled.

Billy is originally from Fort Worth but he bounced around Texas a bit before resettling in Fort Worth again. I asked about his interactions with law enforcement prior to taking the civilian position. He said, “when I was in elementary and middle school there was an Austin police officer who worked with the youth departments. Later on I had been in touch with him through other officers. I thought about going into law enforcement when I was coming out of high school and I learned about civilian work ...I feel like in a lot of ways the things that I do are ministry. We want a nice, clean, safe, community. We may not all agree but we can all be civil with each other. A lot of it is opening your ears and listening to what people are saying. It’s funny how it’s all come full circle,” Billy chuckled.

Billy’s official title in Crime Prevention Specialist. He told me, “There is one (Crime Prevention Specialist) for each division in Fort Worth. Dallas used to have it but budget cuts removed those jobs about fifteen years ago. Other departments call me and ask how our civilian side functions because they want to civilianize their Crime Prevention too. This year, Fort Worth is  implementing a civilian response team which frees up officers to do necessary tasks and a civilian can take reports of minor issues. I stay dedicated to what I do because I am not an officer and can not be pulled to work in patrol as many departments do with officers in specialized positions,” Billy admitted.

Part of Billy’s job in Crime Prevention deals with community relations. I asked Billy about the lessons he’d learned over his 23 year career. He replied, “Community relations is hard work and you can have one incident ruin your hard work that may or may not be what happened in your jurisdiction. One of the big things we need to do better is listen to the community. After one of our shootings, I had a citizen call me and I listened to him vent. I told him I would forward the information along to my superiors. I was able to show empathy for him. The citizen said I was the only person who listened after calling 10 or 15 people.

“We (law enforcement) need to ask questions. Listen and take time to educate. Most items people want us to do we are already doing, it just isn’t publicized.(Because of public pressure) pre-existing policies have now become orders. If we see something out of line, we are obligated to tell our superiors,” Billy said.

Fort Worth PD is one of the departments LETR is striving to build strong relationships with. With our offices located relatively close together, the partnership just makes sense. LETR and Fort Worth PD have teamed up before though. Fort Worth has been involved in Tip A Cop at Texas Roadhouse. Tip A Cops are LETR sponsored events where athletes are paired with officers to serve food and act as waiters and waitresses in order to raise funds for our athletes. Unfortunately the officer who coordinated Fort Worth’s event retired and a new connection was never established after he left.

Even though Fort Worth hasn’t been as involved with LETR and SOTX, they have still completed events that serve members of the community with Intellectual Disabilities. Billy told me about several events, one of them being an Easter Egg Hunt. He said, “the Easter before we last hosted an Easter Egg Hunt for special needs children. It was a smaller event but we were looking forward to expanding it but then covid hit. We put together goodie bags and coloring sets for the kids. It worked out well,” BIlly said. Walmart is a partner with Fort Worth PD and helps to sponsor more of their events like The Blue Elves program, where the department collects toys around Christmas time and distributes them to different community groups. I am excited to collaborate more with Billy and the Fort Worth Police Department’s new chief, Neil Noakes to promote community unity amongst LETR and SOTX athletes.

Billy addressed SOTX athletes and members of the community saying, “The biggest thing is to hang in there. We will get the herd immunity built up. We are seeing the light at the end of the tunnel. We will be able to be out there as a group. We are getting close, and I am ready!”

Major shout out to Billy Rudd and the Fort Worth Police Department. We look forward to collaborating with you more in 2021 and so on!