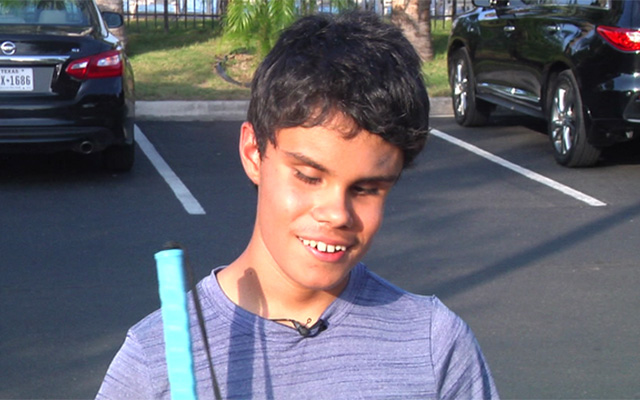 Article originally appears on KVEO. Go to the original article to see the video.

HARLINGEN, Texas - 14-year-old Nathan Rios is considered an inspiration to many. He has run four one mile runs, 13 5Ks, one 10K despite not being able to see. Now, he is attempting a triathlon.

“I have to conquer my fear,” Nathan told News Center 23’s Marlane Rodriguez in an interview.

For his fifteenth birthday on July 1st, Nathan, who is blind, wanted to complete a triathlon, where he will be swimming, biking and running with guidance.

“Swimming is going to be the hardest part,” Nathan said at the Harlingen Country Club, where the triathlon will be taking place.

He learned how to swim through Down by the Border, an organization that helps children with special needs.

His buddy from Run For Me RGV, an organization that pairs a child with a disability with an athlete, will guide him during the triathlon.

His parents taught him how to ride a bike. It took Nathan two weeks to learn how to swim, which was difficult at first.

When not running, swimming or riding a bike, Nathan practices taekwondo and plays baseball, basketball and soccer.

“Soccer is my favorite thing because I get to kick the ball,” Nathan answered when asked what his favorite sport is.

Nathan’s next goal is training for a half marathon.