Panhandle Community aims to get 5,000 signatures during the month of March. 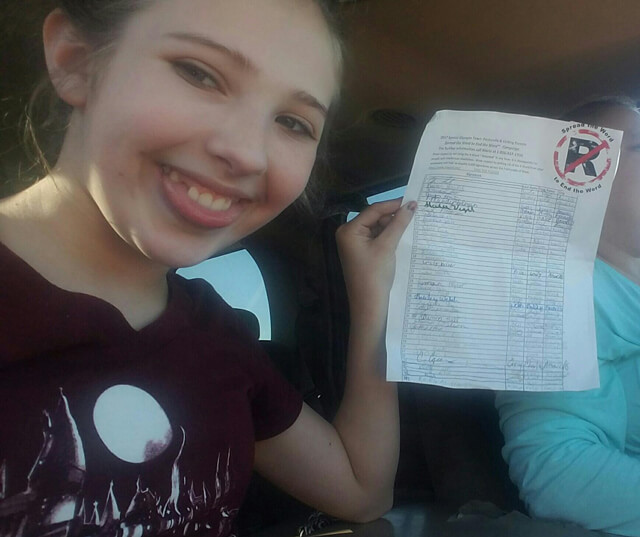 March 1 marked the ninth annual international Spread the Word to End the Word Day, an activation and awareness day by which all are invited and encouraged to take the pledge against the ‘R-word’.

Area 16 and members of the Amarillo community not only participated on this day, but have taken a more aggressive approach, as they are spending the entire month working to educate as many people as possible that the R-word offends people with intellectual and developmental disabilities and the community has zero tolerance for the term.

This past Monday (March 8), 11 groups kicked off the month-long campaign. Between now and March 31, the goal is to attain 5,000 signatures of those pledging to end the use of the R-Word.

So far, the campaign is off to a rousing start! Pictured is Akili Harrold from Galaxy 567 Student Ministries. On the first day of the campaign, Akili got 40 people to sign and take the pledge to Spread the Word to End the Word.

Below is a list of participating groups and a description of what each is doing to “Spread the Word to End the Word” this month. Check back each week in March for an update on the success of the campaign!

Participating locations will be collecting signatures at their office for the entire month of March.

First United Bank will be collecting signatures at their office for the entire Month of March.

Maria Garcia of Uniting Parents will be taking the lead collecting signatures throughout the Panhandle. Maria along with help from her son, SOTX athlete Joe Garcia, and friends will be asking community members to take the Pledge all month long.

Bivins Unified Champions Program will be having a pledge day after Spring Break. This group will be collecting signatures, have a rally plans, skits, and even have written their own music.

West Texas A&M Men of Honor will be having a Pledge Day at the JBK Student Center on the Campus of WTAMU on March 22. They will be challenging students to take the pledge.

SOTX team will be collecting signatures.

AT&T is participating as a company-based challenge.

Taking the pledge with their staff and clients, along with their SOTX team.

Galaxy Student Ministries a group of 5th-7th grade students from God of Wonders Fellowship in Amarillo. This group, with the lead of Deadra Carver and Andy Cortez, have decided to take the pledge to Spread the Word to End the Word. These students are collecting signatures throughout the Panhandle and will have an event to get their entire church involved following Spring Break.

Danielle Compton, the SOTX HOD for the Amarillo High Cluster, is advocating the Spread the Word to End the Word campaign throughout the month of March. Crockett Middle School’s STEP Program is taking charge and changing campus culture.

SOTX team will be collecting signatures.