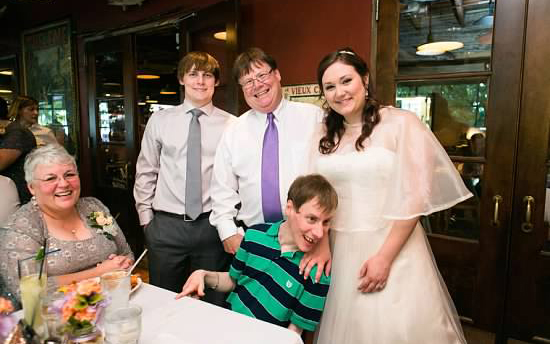 Special Olympics Texas (SOTX) officially announced the winners of its statewide 2016 Volunteer Awards on Thursday afternoon. Among the five recipients of these awards, Carrollton’s Rob, Lori, Ryan and Kyle Mehnert have been crowned the organization's Family of the Year.

The Mehnert family will be formally recognized at an awards ceremony on Friday, Oct. 14 in Bryan/College Station during the 2016 SOTX Fall Classic competition, along with Saint Jo’s Laurie Martin (Trainer of the Year), Sgt. Jason James (Outstanding Volunteer for Fundraising), Jim Domer (Unified Partner of the Year) and Renae Carswell (Volunteer of the Year).

The Mehnert family’s journey with SOTX began when the Carrollton-Farmers Branch school district started its program. Parents Rob and Lori are extremely involved with SOTX. They participate as coaches, Unified Partners and volunteer with outreach and fundraising efforts. Their son Kyle is also a SOTX volunteer. He has volunteered at competitions and has assisted with practices and fundraisers.

“They are totally committed to Special Olympics and do not hesitate to step up to whatever is asked of them,” said Julia Scott, a SOTX volunteer. “They never miss an event or practice and are involved with all of our sports. If they are not actively coaching, they are helping in some way.”

Ryan, who passed away in June, was involved with SOTX since 1999, first with the Carrollton/Farmers Branch ISD All-Stars and then with the Carrollton/Farmers Branch (CFB) Cyclones. Over those 17 years, he competed in Aquatics, Athletics, Basketball and Bowling. In 2015, Ryan set a national milestone, as he was the first Special Olympics athlete in the United States to register for the Unified Relay Across America, a humanitarian event that featured people from across the U.S. running and passing a lit torch from the East Coast all the way to Los Angeles, which was the site of the 2015 Special Olympics World Games.