Harriet Tubman & Eunice Kennedy Shriver Have Something In Common

We’re sure you’ve heard the big news: Harriet Tubman, the leader of the historic Underground Railroad, will be featured on the new U.S. $20 bill, replacing Alexander Hamilton. 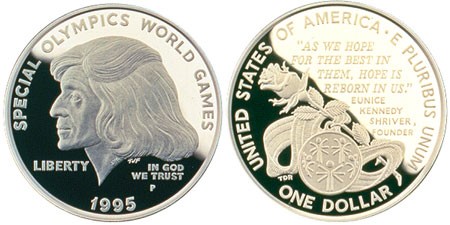 But did you know that Special Olympics founder Eunice Kennedy Shriver was featured on U.S. currency as well?

Mrs. Shriver was honored in 1995 with a silver dollar bearing her likeness—and was the first American woman to be depicted on a U.S. coin while she was still alive. The commemorative coin, which was not intended for general circulation, was sold for $35 each and part of the proceeds benefitted Special Olympics. Approximately 800,000 of the coins were sold, and can still be found for sale online.

The coin marked the 1995 Special Olympics World Games, which were held in Connecticut.