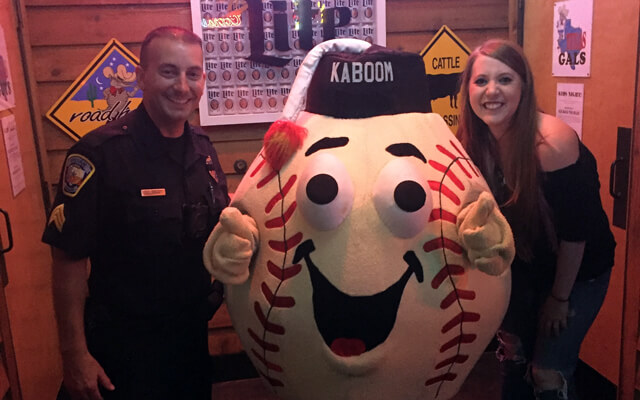 Special Olympics Texas (SOTX) officially announced its statewide 2016 Volunteer Awards on Thursday afternoon. Among the five recipients, Sgt. Jason James of the Bryan Police Department has been dubbed the organization’s Outstanding Volunteer of the Year for Fundraising.

James will be formally recognized at an awards ceremony on Friday, Oct. 14 at College Station High School during SOTX’s statewide Fall Classic competition

James has been a Law Enforcement Torch Run member since 2000 and has become a pioneer when it comes to hosting Tip A Cop fundraisers. During one of these events, restaurants will let local police officers come in to serve patrons and allows them to collect tip money, which all gets donated to Special Olympics Texas at the end of the shift.

These fundraisers are typically one night, but through James’ passion, leadership and dedication, he has been able to expand the fundraiser at the College Station Texas Roadhouse location to a three-night occasion, which generates more funds to support SOTX athletes in the area. By going to a three-night event, James and his fellow LETR members and officers raised more than $20,000 in donations at one location, which is more than three times the statewide average.

“Jason has a commitment to our mission and has demonstrated an outstanding ability to raise funds through the Texas Roadhouse Tip A Cop event in College Station,” said Richard Brown, SOTX Vice President of Resource Development. “The revenue generated by Jason’s Tip A Cop events over the years are legendary, and he has set the gold standard for how to do a Tip A Cop event.”

Due to his success, James took it upon himself to help get the Tip A Cop event in Conroe up and running again.

He traveled out there and shared some of his secrets with the Conroe Police Department. Most Tip A Cop events raise between $1,500-$2,000. With help from James, the Conroe officers raised more $5,800 in a single night. Realizing his success rate, James created a PowerPoint presentation on how to maximize success at a Tip A Cop fundraiser and sent them to other police departments.

“Jason shares his proven strategies to LETR agencies across the state to help them achieve greater success in raising funds to support SOTX programs for our athletes,” said Joan Jarrett, Associate Vice President of Resource Development for SOTX.

Besides the Tip A Cop fundraiser, James also provides support at the Equestrian, Summer Games and Fall Classic statewide competitions.