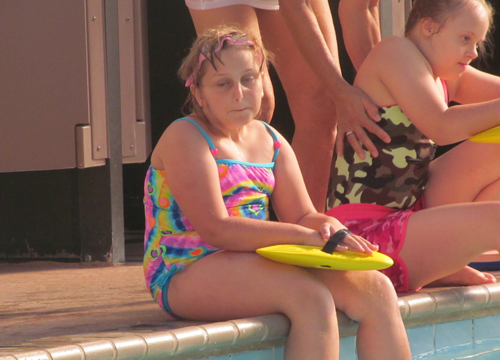 Carley Fisk began competing with SOTX in 2013 when her school introduced it to her.

The San Antonio-area athlete is already very involved, as she participates in bowling, basketball, cycling, track and field, soccer, and her favorite, aquatics.

Over the last two years, Carley has started to build a collection of gold medals from her Aquatics competitions. In 2014 and 2015, she won the gold medal for the 25-meter freestyle relay. Carley considers the first of those medals as one of her best moments with SOTX, not only because it was her first, but because she was able to be successful in a time of need.

Before the 25-meter freestyle event got started, she was asked to fill in for a teammate for that race. Able to do so, Carley was clutch and stepped up in a big way, winning the race the race to earn the gold medal for the event.

Her family is very involved with SOTX. Her parents Christopher and Angela Fisk, and her sister Hayley are all volunteers.  Hayley and Angela, who is also a coach, are both members of the delegation board.

Carley is very outgoing and she loves to laugh. Her hobbies include bowling, dancing, swimming, singing in her school choir and playing with her little brother, who is her biggest supporter.

Carley is grateful that SOTX provides her the opportunity to have fun and play sports that she otherwise would not be able to do.  Not only has she became a better athlete and a more active person, but she has also made lifetime friends.

“SOTX has taught me to be a better person, to share, take turns and show better sportsmanship,” Carley says.  “No matter if I win or lose, I’m a winner.”