As many know, Special Olympics events don’t happen without the support of the volunteers. Each year, new volunteers get their first taste of one of these competitions. For some it will be a one-time ordeal and for a few others it will be an annual tradition. For Fort Worth’s Paul Brockway it became a part of life 47 years ago. 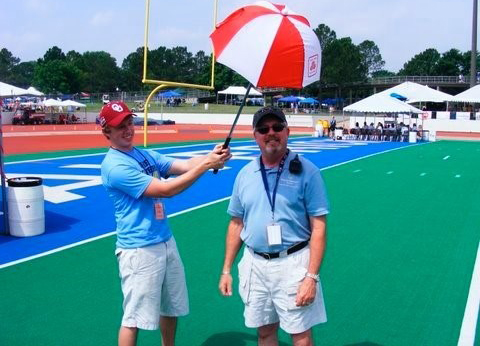 In 1969 while attending Baylor University, Brockway and his classmates were told by Professor Ted Powers that Baylor and Abilene Christian College were sponsoring a track and field meet for people with intellectual disabilities at Paul Tyson Stadium that summer.

The event, which was set to be held for 350 athletes, would better become known as the birth of Special Olympics Texas. Powers told the students that if they were living in Waco and wanted to graduate, they had to help out.

When Brockway agreed to volunteer and help his professor, he didn’t know it would be for something that he would find himself still doing today.

“Once I started and continued to do it while in college, I knew it would become part of my life,” Brockway said. “This is the one thing I would choose to do over again in another life. It’s something that’s enabled me to give of myself and I am always so uplifted when I see the happiness of the athletes and when I watch them give 100 percent.”

Brockway has very much enjoyed getting to know the athletes and seeing some of the same ones come back year-after-year.

One year a girl in a wheelchair told Brockway that she was going to race using crutches the next year. Brockway told her that he would be looking forward to it and also told her to let him know when she would be racing.

“I remember going out to the track, seeing her stand up from the wheelchair and run the race using the crutches,” Brockway recalled. “From there, I felt the tears run down my face. It was just amazing and it brought me such joy. Moments like those are what keeps me coming back and it’s why I love being around these athletes.”

Brockway grew up having an affinity for people with intellectual disabilities.

While in college and during his teenage years, Brockway often visited his father at work, which was at the Westview Auto Clinic. One of his father’s employees had children with disabilities.

“They were like a younger brother and sister to us,” Brockway said. “We would take them with us everywhere.”

As he was dating, he would bring his date on visits to the clinic and if they couldn’t handle being around the children there, Brockway knew the relationship wouldn’t last, because of the compassion and respect he had for the people living there.

Through his many years as a SOTX volunteer, Brockway has served the organization in many capacities. He has been a coach, competition director for Area 11, and as an original member on the organization’s Board of Directors.

The 1981 SOTX Outstanding Volunteer for Sport & Competition and 1999 Volunteer of the Year has too many memories to call his favorite. But, what stands out to him the most is how much a 350-person track & field event in 1969 has transitioned into a program so large today.

“In the very first Special Olympics Texas event, we had athletes running in overalls and boots, or whatever else they had on. Now today, we see our athletes wearing uniforms that will match the quality of almost any track & field program in the world. I really marvel at the great transition Special Olympics has had in Texas over the years.”

Special Olympics Texas – Greater Fort Worth Area will host its annual Spring Games competition on Friday and Saturday, April 8-9 at UT-Arlington. More than 1,200 athletes from the surrounding 10 counties will compete in the track and field events over the two-day span at Maverick Stadium.