SOTX's Mehnert is First Athlete in U.S. to Register for Unified Relay Across America 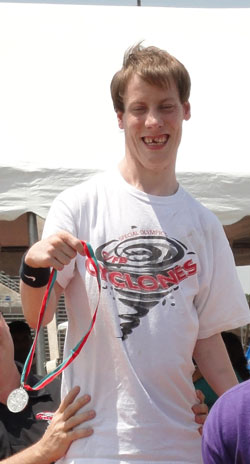 Ryan Mehnert, 27, of Carrollton has made Special Olympics history not just here in the State of Texas, but nationally! As the U.S. prepares to host the 2015 World Games in Los Angeles in July, more than 20,000 people from all walks of life will carry the Games Torch, the Flame of Hope, as they run, walk or bike in the first-ever Unified Relay Across America.

SOTX’s own Ryan Mehnert happens to be the first Special Olympics athlete in the entire country to register for a segment of the Unified Relay. Mehnert will take and run with the Torch when the Unified Relay comes through his hometown on June 26. Mehnert has been involved with SOTX since 1999, first with the Carrollton/Farmers Branch ISD All-Stars and now with the Carrollton/Farmers Branch (CFB) Cyclones. Over the last 16 years, he has competed in Aquatics, Basketball. He is currently an active participant in Athletics and Bowling.

"Ryan's physical conditions and disabilities will make it difficult for him to ever travel the distance required to take part in a World Games; he can't fly and long drives are difficult for him," his father Rob Mehnert said. "We thought this was a once in a lifetime chance for him to have some part of the World Games experience.  As a family, we are very active with they CFB Cyclones and in Area 10, so it was just a natural fit that his mother and I would join him for this experience.  Ryan may not fully understand the significance of the event, but we hope to get a nice crowd out to watch his leg of the Relay to cheer him on - we know he will love that!" 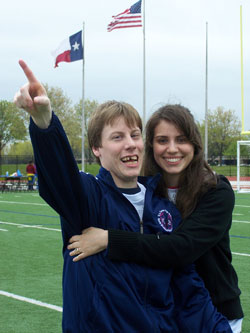 “This is going to be such an exciting experience for anyone involved in this and we thought Ryan would be just so tickled to be a part of it,” Lori Mehnert, Ryan’s mother said. “Ryan is not so much into the competition aspect of the sports he competes in, but he absolutely loves the social aspect. His drive comes from the people that are cheering and clapping for him at the events. So, to be able to get him to help move the Torch along the country for World Games is something we knew would be very special and fun for Ryan. Who wouldn’t want to do it? It’s really a once in a lifetime opportunity.”

Over 46 days the Flame of Hope will pass through 50 states. Three separate relays will run concurrently through the contingent U.S., originating in Augusta, Maine, Washington, D.C. and Miami, Fla, with all ending at the World Games Opening Ceremony in Los Angeles on July 25.

Texas’ leg of the Unified Relay will commence in Miami on May 26 before arriving to the Lone Star State in Groves on June 19. The Torch will be passed hand-by-hand throughout the state, including in Mehnert’s hometown of Carrollton, until June 30 when it exits the state from Amarillo.

For more information, to support Mehnert and others, or to register for your chance to carry the Flame of Hope when the Unified Relay comes to your hometown, click here.