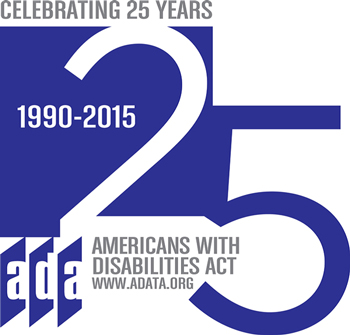 As Special Olympics Texas, along with all disabled Americans across the country celebrate the 25-year anniversary of a groundbreaking bill being signed into law today, 6500 Special Olympics athletes get ready to begin competition at the 2015 Special Olympics World Games in Los Angeles.

On this day back in 1990, President George H.W. Bush signed the Americans with Disabilities Act (ADA), which enacted prohibition of discrimination against people with disabilities in employment, transportation, public accommodations, commercial facilities, telecommunications, and state and local government services.

The ADA and the ADA Amendments Act of 2008 (ADAAA) give civil rights protections to individuals with disabilities similar to those provided to individuals on the basis of race, color, sex, national origin, age, and religion.

“The signing of this law was such a breakthrough,” SOTX President & CEO Margaret Larsen said. “For people with intellectual disabilities, the ADA has taken the school system and has required it to include us [Special Olympics athletes] in their programs. Prior to this, people were separated by disabilities, now they are included by their disabilities. In fact, I really do believe our disabilities add to everybody’s programs, because it expands the knowledge-base and also the teamwork that needs to be evolved.”