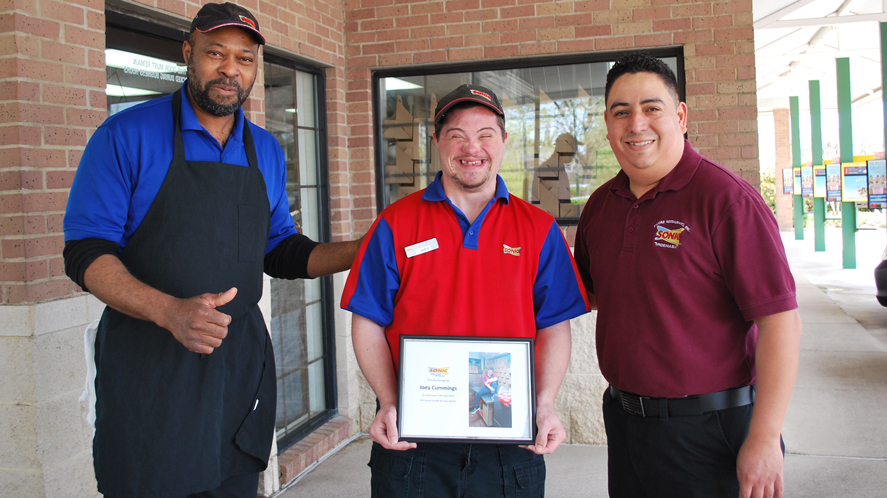 Joey Cummings, 24, of Flower Mound has been a Special Olympics Texas athlete since he was 10 years old. Over the last 14 years, he has been consistently active within the program. Depending on the time of year, Joey can be found in the pool, at the bowling alley, on the bocce and basketball courts or on the soccer field getting ready for his upcoming FC Dallas tryout.

When his mother Andrea was asked which sports Joey competes in, she jokingly responded by saying, ‘Whatever sport is in season’.

Without hearing from that his mother, you probably already got a sense that Joey does it all. That kind of fervor is one thing he certainly does not leave on the field.

When Joey is not preparing for an SOTX competition with the Lewisville ISD delegation, he’s doing other things that SOTX has helped him with, such as socializing with his friends or going above and beyond out in the workforce at Sonic.

After four years of laboring at one of the restaurant’s Flower Mound locations, Joey’s manager Thomas Prim recognized him for always doing his more than what his job description entails while sporting a positive attitude by presenting him with the Employee of the Year award.

“Joey is so upbeat when he comes in to work,” Prim said. “He is always willing to do things without even being asked. He brings such a positive attitude in with him and it’s great to have him be a part of our team.”

Andrea reminisced of Joey’s elation of earning the honor when she picked him up that day.

“He came out running and yelled, ‘Look what I got!’ He was so excited,” Andrea said. “Special Olympics has helped give Joey so much, even outside of sports, and this award is a token of what the program has helped him achieve.”