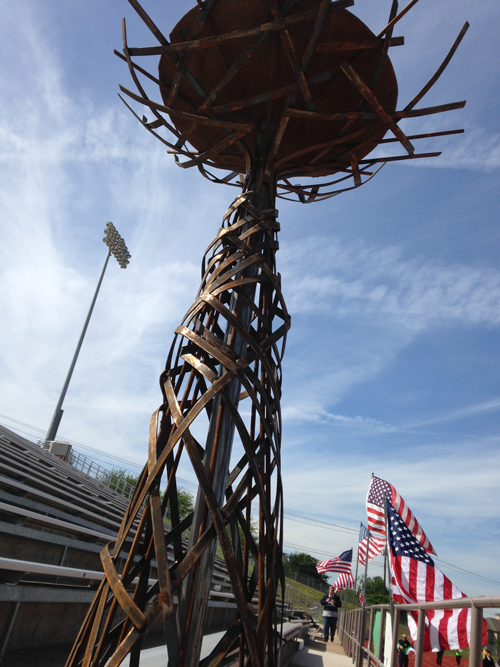 Special Olympics Texas' 2015 Summer Games are just days away! Every year, everyone looks forward to the event where the Games are officially declared underway - the Opening Ceremony. That will take place on Friday night at Maverick Stadium beginning at 7:00 p.m. The Games are ceremoniously declared open once the four regional torches, carrying the Flame of Hope, ignite the cauldron. This year's lighting will be extra exciting, because it will mark the first time that this particular cauldron will be used for SOTX's Opening Ceremony.

Dr. Leslie Low, who has served as Grapevine-Colleyville ISD's (GCISD) Head of Delegation for the last 27 years, always wanted to have a cauldron for her local meets.

To accomplish this vision, she took a welding class in her spare time.

With the help and skills she acquired from that course, Low crafted a cauldron that resembled that of the one used in Nagano for the 1998 Winter Olympics.

Since its creation, Low's cauldron has become a symbol and a staple of ceremonies for GCISD's local competitions.

Now, SOTX will adopt Low's cauldron to kindle the Flame of Hope for its 46th annual statewide Summer Games, a feat that Low never imagined.

"When I welded it, I never had a thought or plan in mind that Special Olympics would use it," Low said. "It's such a great complement that this cauldron is considered high enough quality for Special Olympics Texas to use it for one of its statewide events."