Area 22 athlete Tank Schottle went to Texans training camp and met some of the players, including JJ Watt!

At this moment, football season is in a very premature stage, as many teams begin training this month for their upcoming slate. For Gulf Coast Area SOTX athlete Derek "Tank" Schottle, the 2015 season is already a memorable one. 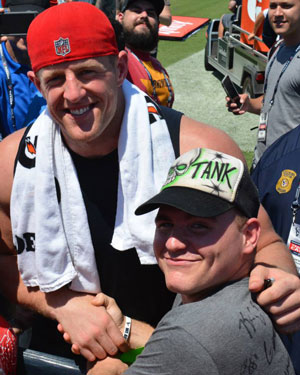 On Monday, Schottle attened Houston Texans Training Camp with his friend Patti "Texans Horns" Cream, who had passes for the session. Both are diehard Texans fans, especially Cream, who attends most events involving her hometown team.

About a month before they went to Texans' Training Camp, Schottle mentioned to Cream that he had never been to Texans' practice and both discussed their dream of meeting defensive end J.J. Watt  From there, Cream made it her mission to make Schottle's first Texan's open practice session a moment he wouldn't forget.

Cream has attended Houston Texans Training Camp sessions before, so she knew if they could get there early enought to find a front-row bleacher seat, it may possible for her and Schottle to meet their favorite player. 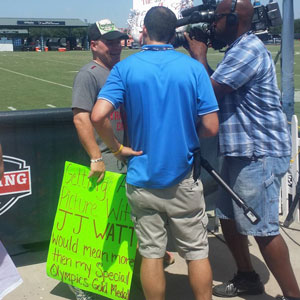 To ensure they were noticed by Watt, Cream had signs made.

"She figured since the players walk right past the bleachers at the end and usually sign autographs, there would be a high probability things would work out," Tank's father Gary Schottle told SOTX.

Tank hoisted one that said: "Getting a Picture With JJ Watt would mean more than my Special Olympics Gold Medal!", while Cream's read: "Meet my buddy "Tank", the J.J. Watt of Special Olympics!!"

At the end of camp, several players walked by the stands to shake hands and sign autographs, including who else? J.J. Watt, who spotted Tank and Patti's signs.

"Obviously the signs helped a bunch," Gary said. "The meeting between Derek and JJ wasn't planned.  Derek was there and it just happened."

Tank told SOTX, "It was my first time going to Houston Texans Training Camp, getting picture with J.J. Watt and being on TV. I am very blessed. I had the best day ever and I will remember this for the rest of my life!"

Tank follows most major sports and would like to work in a sports-related job someday.  He also loves the outdoors (hunting and fishing) and has shot in Sporting Clays tournaments with his father. 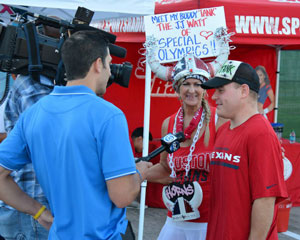 "I frequently leverage his knowledge to assist me in my fantasy football league," Gary said.

Tank has been involved with Special Olympics Texas for 16 years and is very active. In an effort to get healthier, Tank started working out in October of 2014 and lost 83 pounds. He competes in Track, Softball, Volleyball and Basketball with SOTX.