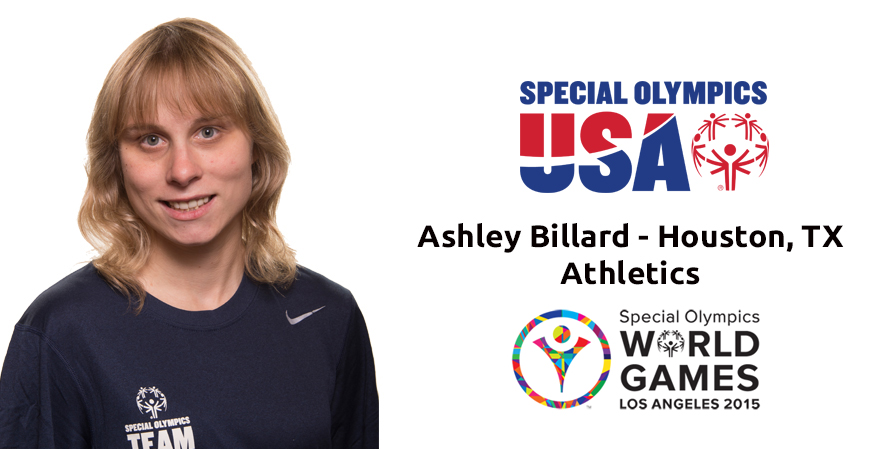 When Houston’s Ashley Billard, 29, heads to Los Angeles to compete in Athletics at World Games this summer, it will mark the second time she is representing her country.

In 2007, she was selected to Special Olympics USA’s Aquatics team that ventured to Shanghai for the World Games.

Prior to that summer’s Games, Billard spent six days a week training at the Dads Club under Moon Wise. All of her hard work and great advice from her coach and all the master swimmers contributed to her bringing back three medals — two gold and one silver.

Eight years later and now focusing on a different sport, Billard has the same grit and determination that helped earn her those medals.

In preparation for the 2015 World Games, Billard was training with her coaches up until the beginning of this summer. Now she is working with her mother, Berndaine Billard, who is a certified coach in Athletics.

According to her mother, Ashley is working hard to be the best she can be.

“She is honored to be chosen to compete in this year’s World Games,” Bernadine said. “She is looking forward to competing and meeting new friends from around the world.”

Ashley first got involved with Special Olympics Texas in 1995, shortly after her and her family moved back to the U.S. from Brazil.

Since she began, Ashley has made countless friends and has learned several sports, including Tennis, Basketball, Cycling, Golf, Triathlon and Volleyball; in addition to Track & Field and Aquatics.

Just last summer, Ashley went to New Jersey as a member of Team Texas’ Tennis team. While there, she picked up a silver medal in Singles and a fourth place ribbon in Doubles.