By Georgia and Marc Lyons 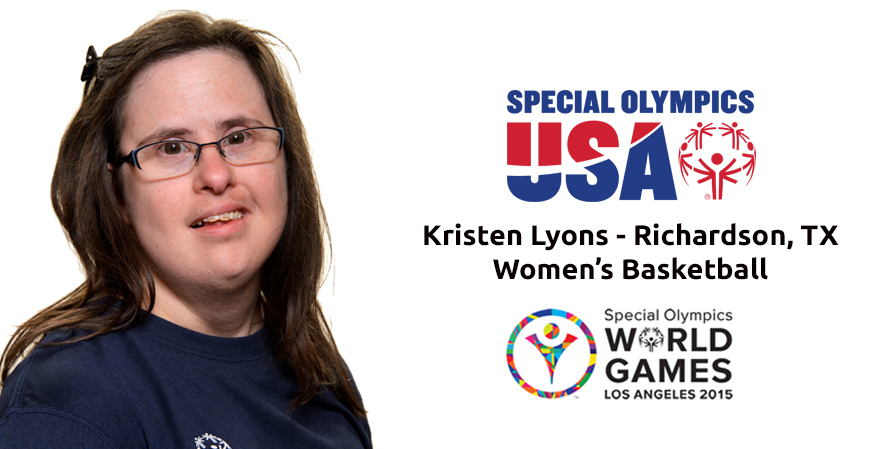 Special Olympics has afforded Kristen Lyons so many opportunities, including one that awaits. On Tuesday morning, Lyons and her Richardson Roadrunners team will make their way to Los Angeles for the 2015 Special Olympics World Games, where they will represent the entire U.S. in women’s basketball.

Lyons has had the opportunity to participate in the Richardson Roadrunners Special Olympics delegation since it began in 1998. Through her involvement with Special Olympics Texas, Lyons has benefited physically, mentally and socially.

At age 40, she has remained physically active through her Special Olympics sports. She currently participates in figure skating, basketball, golf and bowling. These sports keep her muscles engaged throughout the whole year as she figure skates year round and participates in the other sports in their appropriate seasons.

According to her parents, Lyons has improved her physical abilities and grown in ways beyond what they ever thought she could accomplish.

“When she first started playing basketball, Lyons was afraid of the ball,” her mother Gerogia says. “Now, it is a joy to watch her run up and down the court and play tenacious defense — her coach has even nicknamed her ‘pit bull’!”

Through her Special Olympics sports, Lyons has had to focus and concentrate mentally. For example, she has not only had to learn to perform her figure skating skills, she also has had to memorize her compulsory skills routine and her choreographed free skate program.

This memory work has helped Lyons to think and use her muscle memory to perform in competitions with poise and confidence.

“As a parent of a child with special needs, it was a very proud moment watching Kristen figure skate in the Special Olympics World Games in Nagano, Japan in 2005,” Georgia said. “She aced both her compulsory and free skate programs and in turn was awarded a silver medal!”

Lyon’s biggest benefit of her Special Olympics participation is her development of lifelong friendships. The comradery and companionship she has shared with her teammates continues to be a source of her joy and happiness. She plans her entire week around her Special Olympics practices and activities and cannot wait to be with her friends, many of them have been together for over 25 years!