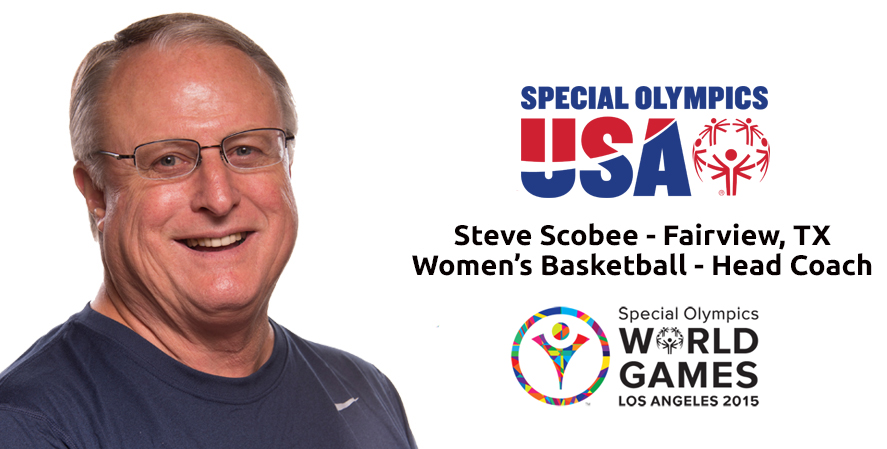 Steve Scobee has a profound affinity for coaching. For 19 years, Scobee coached his own children until they aged out of the recreational leagues in the Dallas area. While Scobee’s children were no longer playing and his youngest daughter opted to be a cheerleader in high school instead of playing sports, Scobee still had an urge to continue coaching. He shortly decided to take his passion to Special Olympics.

“My wife and I were dating at the time and our second date was going to Special Olympics basketball certification class,” Scobee said. “We married within six months and we’re still going strong.”

Nineteen years later, Scobee has reached the pinnacle of his Special Olympics coaching career. He along with his Richardson Roadrunners women’s basketball team were selected to represent the entire country at the 2015 Special Olympics World Games.

“We are the only female basketball team competing for the U.S., so we will be playing a team from another country every game. How exciting is that?” Scobee exclaimed.

Like most of his players and assistant coaches, this will be Scobee’s first Special Olympics World Games experience. Scobee and his team are looking forward to the competition, as well as meeting new friends and learning some of the customs of the countries that they play.

“I will particularly enjoy watching my girls interact with the athletes from other countries,” Scobee said. “I just retired and I hope to be able to be a World Games coach or volunteer for many years to come. I will give whatever time necessary to this cause.”

Outside of preparing the ladies for World Games, Scobee coaches several other SOTX sports. As the Head of Delegation for the Richardson Roadrunners, he fills in wherever he is needed when we need a coach.

“I do delegate my HOD duties and I have a few people who do almost all of the administrative work—I give them all the credit,” Scobee said.

Coach Scobee shares one of his favorite memories of working with the Richardson Roadrunners/Special Olympics USA Women’s Basketball team:

“I have many stories about my Special Olympics experiences. One that I seem to be the fondest of is—we were at the SOTX Summer Games several years ago and we were playing basketball in the gold medal game. It was a very close game and both teams were equally talented. Jenny Hall, our backup center got fouled in the act of shooting and the referee gave her two free throws. The only problem was Jenny had never made a free throw in her life—she just wasn’t strong enough to get the ball to the basket—or so we thought. We were all cheering for Jenny and she shot the first free throw about three-quarters of the distance to the basket. We were all yelling for her to use her legs for strength, and to everyone’s surprise she made the second free throw! Jenny was so proud of herself, as were all of her coaches and the fans. We lost that game and won the silver medal, but this was the best day of Jenny’s basketball career. On the way out of the gym Jenny asked me if she could use my phone. She called her mom and told her about making her first free throw ‘ever’. I was listening and I heard her tell her mom she was the ‘hero’ of the game. I thought that was so sweet! When Jenny hung up she told me that she was going to get the ‘Red Plate’ at supper for the next week because she had done something very special and her family was going to honor her. I was so impressed and I have never forgotten that story. A year later I was talking to Jenny’s mom and I asked her if Jenny had received the ‘Red Plate’ lately. Jane , her mom, looked at me in shock and asked how I knew about her family tradition. I told her that Jenny had confided in me the story a year earlier. Jane was so emotional and impressed that Jenny would share the family story with her coach. I am honored to be close to all of my basketball girls and their families.”