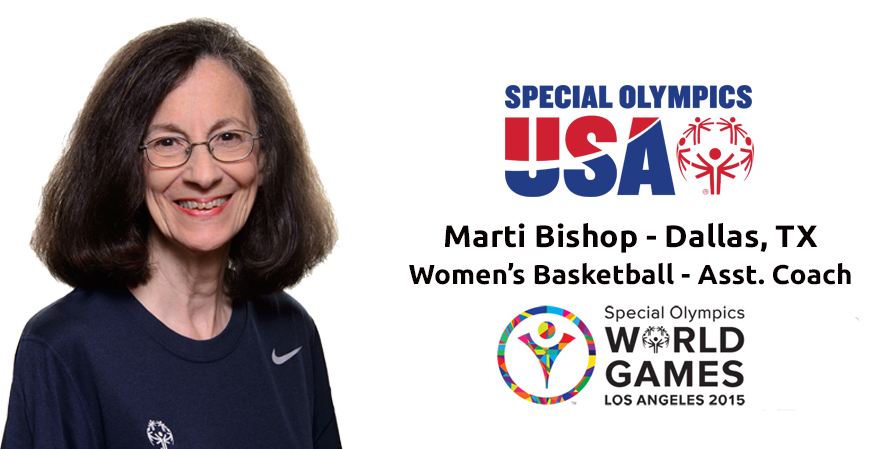 The reigning Special Olympics Texas Volunteer of the Year will conquer another Special Olympics milestone next week. Area 10’s (Greater Dallas Area) Marti Bishop will make her way to Los Angeles for her first-ever World Games competition, as an assistant coach for the Special Olympics USA Women’s Basketball team, which is fully comprised of the Richardson Roadrunners team that Bishop currently coaches.

“My coaching responsibilities at World Games will include assisting a great head coach, Steve Scobee, and being a chaperone for an amazing team of women basketball athletes,” Bishop stated.

From the time the team started prepping for the World Games, Bishop could see how connected and interactive the team became while training with the two Unified male teams from Minnesota and New York at Training Camp. Bishop went on to explain how this once-in-a-lifetime experience has brought the team even closer.

“It has bonded all of them even more this year,” Bishop said. “They have been working together very hard in training to achieve this goal of playing at World Games.  I look forward to seeing their enjoyment of the whole experience and seeing them and other athletes from around the world being celebrated for their abilities and accomplishments.”

Bishop was introduced to Special Olympics when her son became an athlete in basketball in 1993 with the Richardson Go-Getters delegation. Later on, the head of delegation asked her to assist from time-to-time with uniforms and transportation.

“Special Olympics made such an amazing difference in the life of my son in growth, mental and physical development, socialization and to our family through connections with other families,” Bishop said.  I wanted to be a part of making that happen for as many other athletes and their families as possible, so I became a certified volunteer in 1997.”

Bishop began by training to be a soccer coach.  Only a year later, she joined two coaches in being a founding member of a new delegation; the Richardson Roadrunners.

Now with the Roadrunners, she assists the head of delegation in coordinating activities, practices, communication, finances and maintaining uniforms and equipment. In addition to all of those duties, she coaches individual skills Soccer and Bocce.