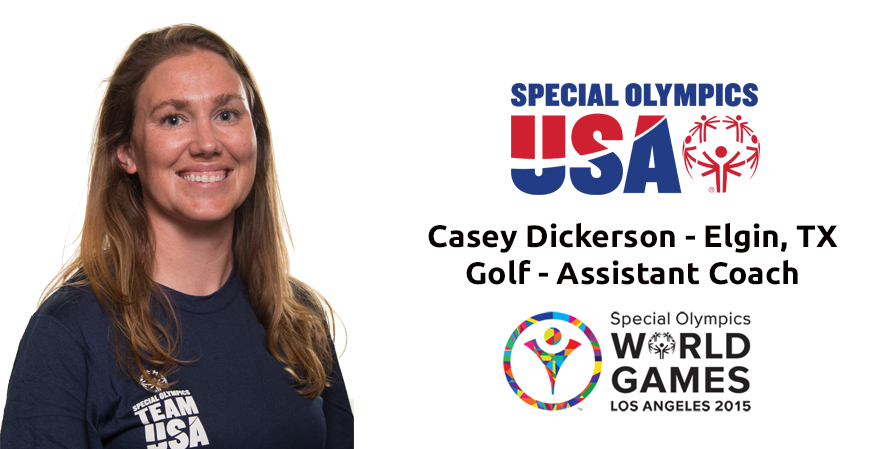 A year after serving as the assistant Golf coach for Team Texas in New Jersey at Special Olympics USA Games, Casey Dickerson will serve in the same role, but on a much larger stage in Los Angeles at the 2015 Special Olympics World Games.

Dickerson, who is Central Texas area’s lone representative selected to Special Olympics USA, has three athletes and two Unified Partners assigned to her. Since the team was officially selected back in September, the Elgin resident has been communicating with each of them.

“We have gotten together twice as a team so far to do some practice rounds,” Dickerson said. “At Games, we’ll help make sure the athletes get everywhere they need to be and are as ready as they can be for their rounds.  During the actual rounds of golf, we can’t do any work with the golfers, but we’ll observe their games and go over anything they need to know for future rounds once they have finished.”

In 2003, while studying to major in Special Education at Texas A&M, Dickerson got an email from SOTX asking for volunteers for state games. After making the commitment to help as a timer for Aquatics, she was hooked.

“I really enjoyed it and kept going back every year,” Dickerson said. “Once I started working in the classroom I was able to work with the athletes themselves and then help them out in Athletics and Bowling.”

Following college, she started at Down Home Ranch in 2006. They had done Special Olympics in the past, but didn’t currently have much going, so another staff member and Dickerson started getting their coaching certifications.

“I started out in bocce and as the guys would come up with other things they were interested in, we would just keep trying to work it into the schedule,” Dickerson said. “Now it’s one of my favorite things that I get to do out here!”