Hernandez, a Dallas resident, was diagnosed with Rubenstein-Taybi Syndrome (RTS) when he was three months old. The outlook that his grandparents were given was that Hernandez would never live to be 11 years old, would never speak or sit up without being strapped in a wheelchair. The only way he would receive nourishment would be through a feeding tube through his stomach. He would be severely mentally handicapped. 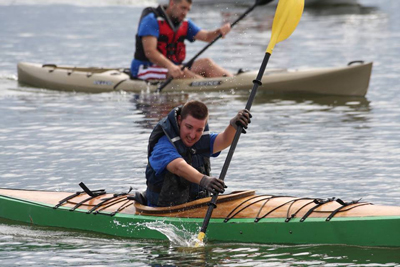 "We did not accept that prognosis and took it upon ourselves to try alternate feeding methods," his grandmother Kathy Green said. "We fed him with an eye dropper, which took us hours to do, but eventually it paid off and he started eating on his own. The rest is history."

In 2012 Hernandez met another young man with RTS, Christian Aguilar. They have been best friends since the day they met. They talk on the phone every day. It is amazing to see how much they are alike. They call themselves the RTS Brothers. They compete against one another in Basketball and Softball.

Hernandez has been working very hard every day to prepare for the World Games. He goes to the gym twice a week and goes to White Rock Lake five days a week to kayak with his teammate, Travis Smith, working on strength and technique. In addition, his parents also have some exercise’s set up at home for him.

He was asked to compete in the World Games in Greece in 2010, but did not accept because his kayaking teammate was not eligible to go. This will be his first World Games.

It means the world to Hernandez to have been selected to compete in the World Games to represent his family, his country and his Special Olympic teammates. He is looking forward to making new friends and meeting other athletes from other countries and meeting up with his USA Kayaking Teammates again.