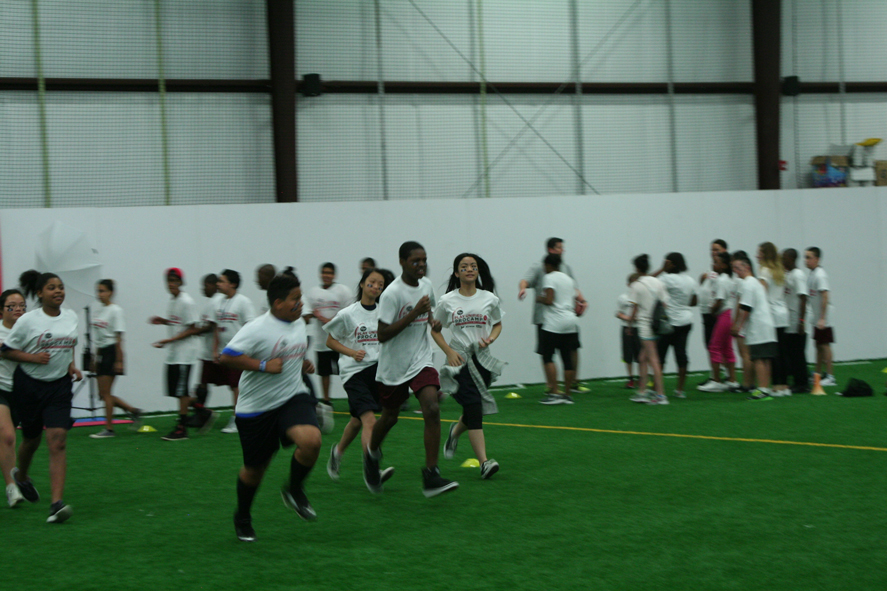 Students from all over the Greater Houston area came together to "Play Unified" on Friday. More than 140 students from seven Meet in the Middle campuses took part in the Kroger Play Unified Pro Sport Camp, hosted by Bruce Matthews, at UScore Soccer in Spring, Texas.

Special Olympics Texas (SOTX) athletes and Meet in the Middle (MIM) partners were taught general athletics skills, along with some life skills from Matthews and the coaches that assisted the camp that was put on by the partners of Proctor & Gamble. Brad McCoy, father of former Texas Longhorn quarterbacks Colt and Case McCoy, served as the moderator of the event. 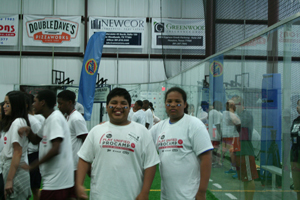 “It was a really cool event that I’m very blessed to be a part of,” Matthews said. “Kroger, Oral-B, Tide and Crest got together with Special Olympics Texas to put on this well-organized camp. It’s just been a joy to have been involved with them today.”

On this day, no one could tell a SOTX athlete from a MIM partner, because they all unified to play together. All who took part got the opportunity to go through passing, catching and running drills before taking part in the 7-on-7 football game. Various awards were presented to the coaches, athletes and partners before everyone was treated to an autographed photo of Matthews and lunch at the conclusion of the camp.

“We taught them [athletes and partners] a lot of football stuff," Matthews said. "It’s more so teaching general athletic skills, but using a football theme. It’s really cool. All of the athletes are encouraging one another. We’re also trying to teach some life skills as well and lessons about team work."

M.J. Carvel with Dueitt Middle School helped coordinate this event by getting the other MIM campuses within Spring ISD to take part in Friday’s camp.

“This event shows us that everyone is the same; people can work together and Meet in the Middle brings together athletes and non-disabled peers,” Carvel said. “There’s students that improved in football skills from the time we practiced last week all the way up to today. Everyone is having fun.”

Special Olympics has a very special place in Matthews’ heart. 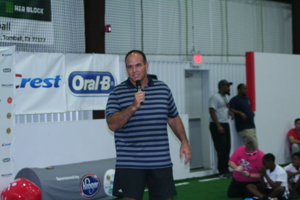 “Anytime I get around Special Olympics athletes they really inspire me. It’s an opportunity to go out there and encourage these athletes, as well. It always reminds me that that heart of competition, no matter the level of it, is always the same. I just really enjoy being a part of this.”

Matthews has been involved with Special Olympics since he was about 11 years old. His brothers swam, played basketball and floor hockey while participating in California’s program.

“Just growing up around it [Special Olympics] and the teamwork and camaraderie—all of the things you take for granted while playing in the NFL is out here,” Matthews said. “My youngest daughter, Gwyneth, is going to compete this fall, so we’re very excited about that.”