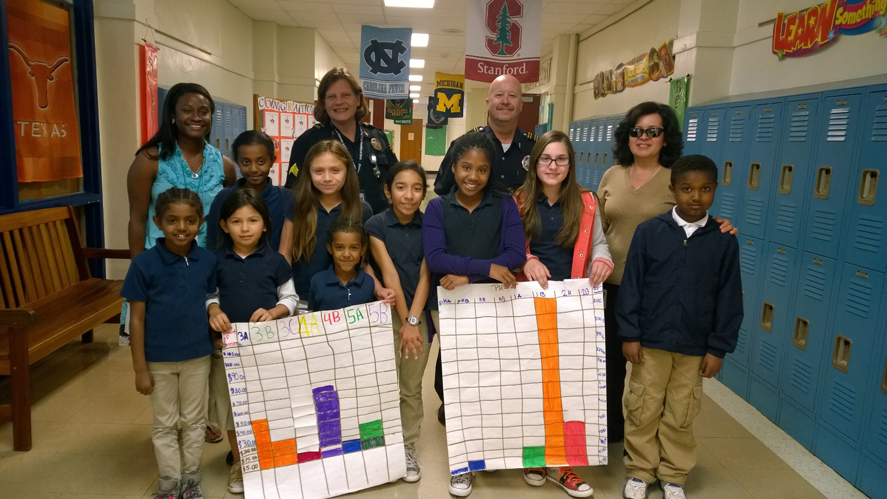 Congratulations to Ben Milam Elementary School in Dallas for raising a grand total of $644.87 during its school-wide Penny Drive this spring! Over and over again, Ben Milam Elementary has proven to be a proud supporter of the Law Enforcement Torch Run (LETR) and Special Olympics Texas.

The school was chosen for the Penny Drive, because it is on the Dallas Police Department’s Torch Run route and the students really enjoy coming out and cheering on the runners.

“Unfortunately, this year’s run fell during their testing week and they couldn’t come out, but are really hoping next year the timing is better,” DPD Volunteer Coordinator Terri Clark said.

According to principal Anna Gamez, the school was able to raise so much money in a short time thanks to a group of students involved in the African American Success Initiative (AASI), who chose to do this fundraiser as its service project for the year.

“They placed posters throughout the school, made it part of their morning announcements and created graphs to show their progress among the various classes,” Gamez said. “All of the grades competed against each other with the winning class and top three students all receiving an ice cream party.”

The attached photo is most of the students from the AASI group along with the teacher, Miss Brandee Lewis, from the winning class, which was a 1st grade class who raised over $250 alone! The top three winners were from various grades and enjoyed their winning ice cream!

Following the success of this Penny Drive, Clark told Gamez that they will use Ben Milam Elementary School as the standard for all of Dallas’ Penny Drives. And now they have a lot to live up to!

[Special thanks to DPD Volunteer Coordinator Terri Clark for sharing the news of Ben Milam Elementary’s great success in their Penny Drive for SOTX.]