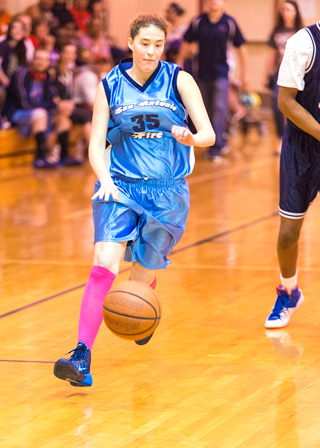 After competing as a swimmer and on the cross country team back in high school, Jaime Holt, 24, continued her passion for those sports by getting involved with SOTX nearly four years ago after a friend told her about it and encouraged her to try it out.

Since then, she has been very active in the program. Her parents Mary and Steve have noticed the great affect her involvement has had on her on a daily basis.

“Shortly after taking a chance with SOTX Aquatics, Jaime felt better about herself,” Mary said. The program has motivated her to exercise more, leading her to participate in basketball and athletics (track and field) competitions.”

Today, Jaime is an honors college student taking music theory and composing classes. Outside of school and SOTX, her hobbies include computers, drawing and video production or editing.

“She has put together slide show videos and works the camera at Church, up to three times a week,” Mary said. “Next, she would love to learn how to operate the sound board."

In addition to the San Antonio Spurs, country music and the television show, One Tree Hill, Jaime has a special interest in Asian culture. She looks up to Olympic swimmer, Park Tae-Hwan, loves Chinese food, and enjoys Korean Pop (K-Pop).

Jamie appreciates that SOTX has helped get her in shape in and out of the house. In the future, she would like to beat her personal best times and continue to be a good teammate to others.

As for her parents, they claim SOTX has created a safe environment for their daughter and they hope Jamie will keep challenging herself and will fulfill her destiny with purpose and direction.