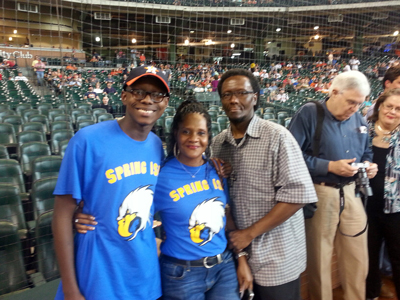 Last weekend, Greater Houston and Heart of East Texas-area Special Olympics Texas athletes were recognized by a pair of local professional sports teams in the city.

On Friday evening (Aug. 14), the Houston Astros honored SOTX athletes, coaches, families and volunteers by providing 1,800 tickets to its home game against the Detroit Tigers at Minute Maid Park. In addition, James Cyrus, one of the Area 4’s Athletes of the Year threw out the ceremonial first pitch!   Prior to the game, Cyrus was also able to meet Houston Astros legend Jose Cruz. The former Astros’ outfielder signed Cyrus’ cap, ball and glove!

During pregame, a 15-second SOTX Public Service Announcement was featured on the Jumbotron. It was a memorable night for all in attendance, and a wonderful opportunity to share time together as they cheered on the Astros to a 5-1 victory!

The next night, SOTX was selected as the Houston Texans’ Homefield Advantage Captains, as part of Texans Care.   The athletes were treated to pregame activities, time on the field and they led the players out of the tunnel.  They were also treated to the game after their introduction. 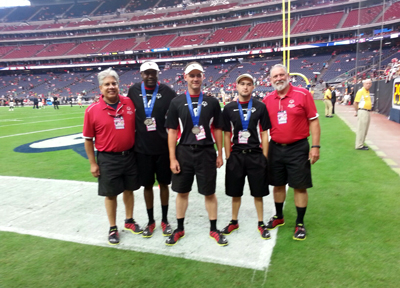 “Ross, James and Jaime could not believe the opportunity to run out of the tunnel on the field and be next to the cheerleaders and cheer the team onto the field,” Dr. Fred Clubb said. “They all thought it was an awesome experience.”

Area 4 selected the 2014 Team Texas Flag Football team from Area 6, who won a silver medal at the 2014 Special Olympics USA Games in New Jersey. Three athletes and one Unified partner were able to partake in this event.  All arrived early to NRG Stadium and walked the blue lot to see all of the incredible and fanatical tailgaters. Once inside the offices, they met the Texans’ cheerleaders and had photos taken with a few of them before going onto the field.

“The athletes were literally inches away from the players; it was amazing,” Area 4 program director Renee Klovenski said. “Kickoff from field level is an amazing site to see and hear. It’s way different from the stands.”

Before everyone entered the field, they met retired Texans’ wide receiver J.J. Moses, who currently works in the organization’s community relations department. He came to meet the athletes and spoke to them about their success at National Games.

“Our athletes were great SOTX ambassadors and they were very warmly received,” Clubb said. “They were awestruck by all the pregame activities and being so close to the Texans as they warmed-up. The Texans organization did an outstanding job in working with our athletes.”