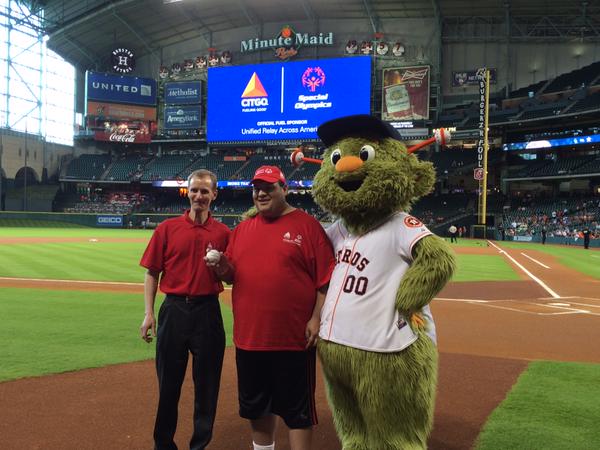 Photo courtesy of The Houston Astros.

Area 4 athlete Neil Stortz got the chance of a lifetime on Monday night. To recognize CITGO’s official fuel sponsorship for Special Olympics’ Unified Relay Across America, he was invited to throw out the ceremonial first pitch at Minute Maid Park before the first-place Houston Astros hosted the Colorado Rockies for the opening game of a three-game series.

Stortz started playing with the Pasadena Special Olympics team in 1994 at the age of 15.

He was not able to run at all, but after a couple of softball seasons, he showed major improvements and still continues to improve in each sport that he participates in.

Stortz started with his favorite sport at that time, softball, and he has since grown to enjoy participating in basketball, soccer and bowling. He is currently a team captain for his soccer team and was also selected "Area 4 Male Athlete of the Year" for 2014.

Through SOTX, he has been blessed with many self-improvement opportunities including Lennar Builders Life and Work Skills Training.

He loves the friendships he has made and has developed a new family in his fellow SOTX athletes. Stortz is a leader on-and-off the field and continues to be an inspirational athlete everywhere he goes!