When the 14th annual Fall Classic takes place in Bryan-College Station in two weeks from now, more than 1,000 athletes will not be showing up to get a medal just for participating. Since August, every athlete that will jump in the pool or take the field during the weekend of October 16-18 in Aggieland, has been going through a challenging process—training. With the help and dedication of the coaches over an eight-week period, these athletes are determined to make their 2014 Fall Classic experience one to remember whether they win or lose.

Hughie Shaw, a longtime coach for several Special Olympics Texas sponsored sports at Marbridge Foundation, tries to start the training process for his athletes slowly. In addition to the hands-on aspect of the game, the Area 13 delegation goes above and beyond in an effort to prepare their athletes as best as they can before competing. Shaw and his fellow coaches hold classes throughout the week for most of the sports their athletes take part in.

“Softball has five classes during the week,” Shaw said. “We get a chance to train our athletes on the basic fundamentals of the game and the rules of the game, so they get a little bit of that and at the same time get a chance to work on batting, hitting and catching.”

Austin Parks & Recreation (APR), another delegation in the Central Texas area, has been working hard to get ready to defend last year’s state softball title at Fall Classic. During area competition, APR claimed the gold medal for the fourth straight year under head coach Chris Meza. 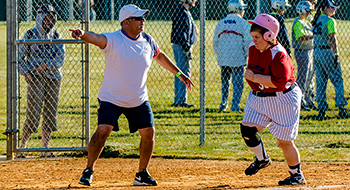 Since leading the APR squad, Meza has been poised to give his athletes the notion that they can succeed in anything they work hard at. Whether his team wins or loses, he just wants his team to learn and enjoy the experience.

“It’s not about winning and losing, it’s about competing and that’s the one thing that we do really well,” Meza said. “When it comes to the Fall Classic, we know that we are one of the better teams in the state, and we can stay that way as long as we keep our attitude strong and if we work hard when we come to practice.”

APR’s consistent success can be attributed to Meza’s style of being able to get his athletes to zero in on the essentials of the game. From year to year, the players of APR don’t just pick up where they left off the previous season. Instead, they take time to call to mind the highs and lows of the previous season and then work on relearning all of aspects of the game.

“Eight weeks is pretty tough to get a team ready whether they’re Unified or traditional, but it doesn’t take us much time to find our groove,” Meza said.