“I try to make it as much fun for the student body and the teachers as possible. I work with the principal and vice principal to make some contest that get the kids involved in. I also get the principal to make a “jean day” pass for the teachers who buy a Torch Run shirt. We also make Friday Torch Run t-shirt day. This year I sold t-shirts to the kids also, and put on an ice cream party for the class that sold or bought the most shirts. We sold more than 2,000 Torch Run t-shirts this year.

Then at the end, I have a pizza party for the class that raises the most pennies.  Finally, I incorporate an end of the year party for the school. There we cook hot dogs, and we announce the "winner"/loser of the contest between the two principals. _That contest raises the most money._  I put two buckets in the office—one for the principal and one for the vice principal. The kids like putting money in the buckets for the principal if they get to do something to them. 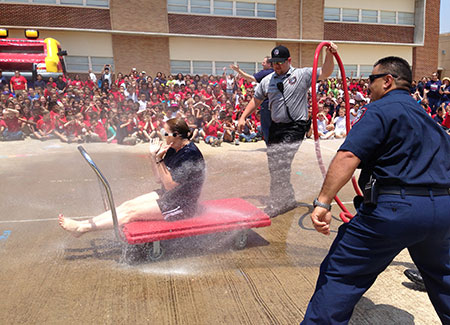 Last year, we had a “Hose Dugan Day.”  Mrs. Dugan is the principal and the contest was the principal that raises the most “loses” and got hosed by the fire department. She raised more than $1,000 and this year she did about the same.  The principals have to get involved…and the ones here like to play the game. The principal and assistant principal were always coming up with something to get money in the others’ bucket.

I get really involved with the kids and so it makes it easy to get them to do things with me.  We have a pep rally where we bring in SOTX athlete Colby Bannister to talk and we work on getting the kids all pumped up and ready to start bringing in the money. We also mention any athletes they have in the school so they see where the money is going to.”