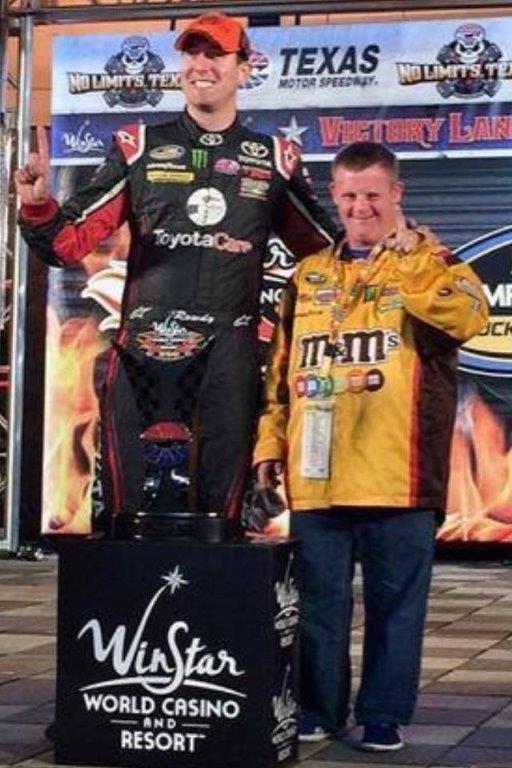 Without the ever-changing social media driven world we live in today, some amazing experiences just wouldn’t happen. For one SOTX Area 13 athlete, a Facebook post by his mother late last spring was a means to him having one of his dreams come true.

Several months ago, Charlotte, Jared’s mother, posted a picture of Jared rooting for his NASCAR hero Kyle Busch on Busch’s Facebook fan page. Shortly thereafter, fellow fan and supporter of Busch, Brandie Merrill, saw the post and made it her mission to get Jared meet Kyle Busch.

Merrill got her effort going by creating a Facebook page – ‘Jared's Mission "Jared's Mission Is 2 Meet His NASCAR Hero Kyle Busch’ on May 8, 2014. It didn’t take long for supporters to jump on the bandwagon to assist in making this dream come true for Jared. In less than two months, the page received more than 200 ‘likes’ and plans were arranged for Jared to meet his hero on Halloween night in Fort Worth.

Not only did Jared get to meet Kyle Busch, he got to see his hero in his true light– as a winner.  On the night of the race, Busch took first place, earning him the the chequered flag for his seventh time this season.

Waiting in the pit to meet Kyle and his wife Samantha after the big victory was Jared! During the race, Jared got to hang out in the pit as his hero raced and checked in for maintenance during the race.

“The crews were amazing, they handed him the lug nuts from the truck when they took them off,” Charlotte said. “He was also given— from the crew— a bag of victory hats.  He also was on TV and many fans from the hotel to the track stopped him and said they saw him on TV.  Even a crew from Trevor Bayne was treating him like a King.  This was a true experience.”

See more photos on the Facebook page made for Jared and watch video of Jared in the pit below.