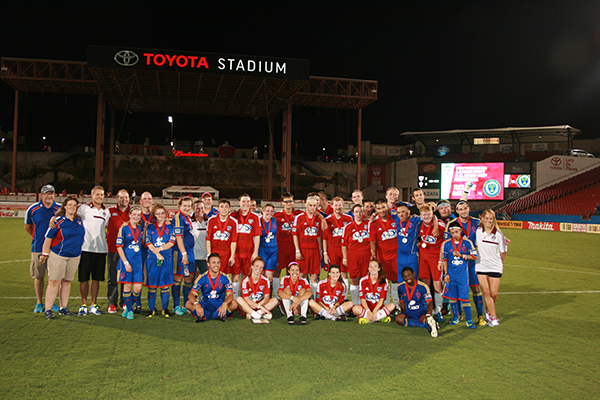 
FRISCO – A pair of second-half goals by Jacob Hill and Scott McIllhenny lifted the FC Dallas Special Olympics Texas squad to a 2-0 win over the Colorado Rapids Special Olympics Colorado team on Saturday night at Toyota Stadium. Hill broke the scoreless tie in the 32nd minute before McIllhenny registered an insurance tally in the 39th minute. The game was played as part of the partnership between Special Olympics and MLS WORKS, Major League Soccer’s community outreach initiative.

It was the second-straight year the two teams clashed. The Colorado Rapids SOCO team returned FC Dallas SOTX’s 2013 visit to Dicks Sporting Goods Park in Denver by making the venture to Frisco for the 2014 rendition.

Back in June, the team was signed to pseudo contracts by FC Dallas President Dan Hunt, making them official members of professional soccer club. After inking the agreement, all players were fitted for new uniforms and had a video and photo shoot before facing the masses at Media Day.

Athletes were featured on the cover and inside the game day program and during pregame and halftime Interview on the stadium Jumbotron.

The 11-aside Unified game was played on a full-length MLS soccer field. Following the match, members of both teams were given medals for participation from FC Dallas manager Óscar Pareja.

Before competing on the field, the two teams attended the Texas Rough Riders baseball game together on Friday night.

Anthony Campise (Athlete): I would like to thank the entire FC Dallas organization for allowing us to be a part of their family for the last two years. This has been such a blessing and amazing experience that we could have only dreamed of. We were extremely happy to represent FC Dallas and not only not lose, but dominate just like the pros. It's all just been so surreal and over in a flash. Thank you, FC Dallas for the amazing memories that'll last forever. Our organization is very thankful for this opportunity and hopefully this can lead to more people accepting people with intellectual disabilities.”

Alex Cowan (Athlete): Thank you, FC Dallas for the awesome experience!  It was an honor to play at Toyota Stadium.  It was really cool to see replays on the big Jumbotron.  Colorado was a really good team and they showed a lot of good sportsmanship.  I'll never forget this night!

Sharon Rooney (parent): I would like to thank FC Dallas for all that they have done for our athletes.  You have given them an experience and memories to last a life time.  The photo shoot, videos, practicing with the team and then playing at Toyota Stadium was awesome.  Patrick [Rooney] talks about this all the time.  The interest you have taken in our athletes has been wonderful.  Your generosity will be forever appreciated.  Thank you again!

Katy Williams (SOTX Staff):  The best part of working with FC Dallas is that they never once treated our athletes like they had any type of disabilities. They treated our athletes like part of the team and had clear expectations for how they should act and represent FC Dallas. Our Special Olympics athletes thrived in those expectations and were gracious and respectful through the entire experience.

Special Olympics Unified Sports® brings together athletes with and without intellectual disabilities to train and compete on the same team. Throughout the year, Unified Partners participate in a variety of sports to improve physical fitness, sharpen skills, challenge the competition and have fun!