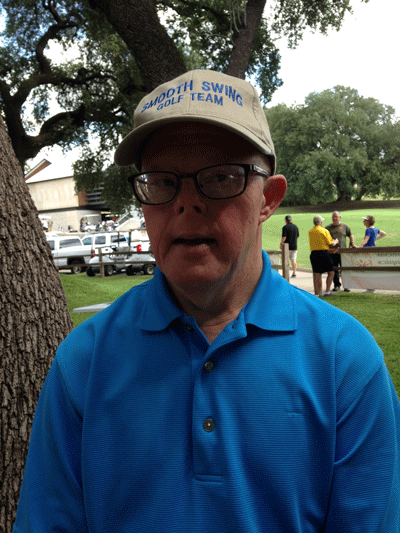 Michael Badger has a good life.

This was apparent when Michael took a few minutes to answer some questions after his round at the Area 11 Golf Competition at Rockwood Golf Course in Fort Worth.  He and his partner, Scott Parkin, had just completed nine holes of alternate shot.  In alternate shot, the athlete and the partner take turns hitting the same ball.  The athlete tees off and the partner hits the ball from where it lands. They continue taking turns until the ball is holed. On this day, Michael and Scott scored a 56.

Michael, 57, has been participating with Special Olympics since he was 12 years old.  He started when he lived in Florida.  He and his family moved to Texas, where he found a delegation with whom he could compete and has been involved ever since.  Throughout his long career with SOTX, he has participated in Athletics, Aquatics, Cycling and Golf. In addition to golfing with Smooth Swing Golf for the last 13 years, he cycles with Special Friends.  He attends Chapter Games each year and has even gone to National Games, representing Texas as a cyclist.

Michael’s parents, Bobbie and Jim, have really seen SOTX evolve into the fantastic organization it is today.  Bobbie can be found at every competition cheering Michael on.  The Badgers live in Colleyville where Bobbie teaches piano. They attend First United Methodist Church in Hurst and Michael is an active participant in the special needs Sunday school class. The Badgers are also very active in North Texas Special Needs Assistance Partners (SNAP).

Michael has a job that he loves. He works five days a week at Market Street in Colleyville.  He even fits in cycling training every day when he rides his bike to work!

Market Street has been a great place for Michael. Recently, he was awarded a watch to commemorate 10 years of employment.  He wears that watch with pride.

Market Street takes its commitment to Michael and the special needs community seriously.  The company participates as a sponsor of both Smooth Swing’s Golf Tournament and SNAP’s annual benefit.

Scott is Michael’s partner on the golf team.  This is Scott’s second year as a Unified Partner. The time required to be a partner is significant.  Each team needs to get in at least six rounds of golf before area competition.  Then there are the tournaments, Area 10, Area 11 and Fall Classic.  Scott enjoys it all.  As a matter of fact, so does his wife, Kristie, who brought their son, Kasey, out to the Area 11 competition to support the team! Recently, Scott and his wife surprised Michael with a new set of clubs. Bobbie was overwhelmed and Michael’s game has improved since using the new sticks.

Michael loves his new glasses, too. During Summer Games this year, Michael’s delegation visited Athlete Village where they were treated to a round of Healthy Athletes screenings.  At the Opening Eyes screening they learned that Michael’s vision had changed and he was treated to a cool pair of new glasses.

Michael is a great example of an STOX athlete.  He is a good citizen and active in his community.  He has a job which he enjoys and he participates in Special Olympics year round!  It all works together to make Michael the happy guy that he is!