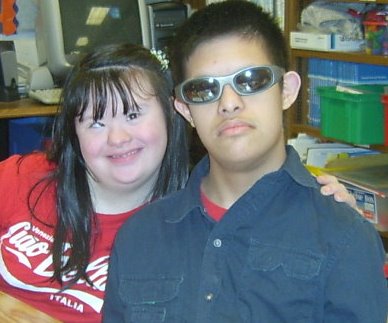 Christian Martinez earned the nickname, "Mr. Cool", back when he was a student at Amparo Gutierrez Elementary School.  Well-known for his singing and dancing, once he moved on to Trautmann Middle School, he was always selected to perform alongside the cheerleaders at pep rallies.  He would even participate in many of the school talent shows.  It was at Gutierrez Elementary School that he began participating in bowling and athletics with Special Olympics Texas. He began competing in aquatics while at Trautmann, and is now an avid swimmer at United High School in Laredo. In fact, during the 2012-2013 school year, Martinez's coaches gave him the opportunity to compete with the U.I.S.D. District Swim Team in all the UIL meets.  He even got to travel out of town with his teammates and is proud and excited to be on the team.

Martinez is very popular at U.H.S. and still performs in school talent shows. This school year, he played his electric piano in one of the shows and received an awesome response from the crowd.  Although he is a 2013 United High School graduate, he will remain in school to attend the Cherish Center, a vocational school where he excels in the culinary arts class.  He has always enjoyed baking and cooking, and even competed in Laredo's local fair and bake-off. Martinez now has several ribbons on display from the contests!  A man of many skills, Martinez recently painted a picture as part of a mural in the Laredo city park, with the help of a buddy.  The painting was part of a project to beautify Laredo.

When he's not competing and giving back to his community, Martinez is active with his church's youth group and choir.  Those who know him describe him as a well-rounded teenager with many talents and many friends, and someone who readily accepts any challenge.